"Let Me Take U 'Round the World" - Purple Reign Conference

Great news! I have been selected to present at "Purple Reign: An interdisciplinary conference on the life and legacy of Prince" at the University of Salford in Manchester, England!

During the conference, which takes place May 24-26, scholars will discuss topics from "Prince as embodiment of the post-modern blues aesthetic" to "Prince, the representation of male pop stars and the discourse of girls’ magazines of the 1980s and 1990s." Of course I will present on Prince's spiritual journey, but only from 1958-1988--the span covered by my thesis at Ohio University.

The conference will also feature a Q&A segment with former Prince guitarist Dez Dickerson. It's funny because I've been trying to interview Dickerson since 2010. He even autographed his autobiography for me. I wonder if I'll get that interview now.

This is definitely one of my greatest accomplishments, and it will happen just four days after my birthday! I've had a really rough year, so this is a blessing.

I won't have time to visit London (it's five hours away), but I hope to hop over to Liverpool for some sort of Beatles tour.

As far as my book, I'm getting close to being done. I have an awesome agent who really believes in the project. We're still pitching publishers. I have a good feeling about one in particular; we're waiting for an answer. I'm also hoping I'll meet some publishing contacts at the conference.

I've accumulated an impressive list of interviews and I'm hoping to add more soon. I'm definitely going to lead with my participation in the conference when I submit requests.

As a journalist, I live a very modest lifestyle, so I've started a GoFundMe campaign for travel expenses. It's really for friends and family members who have seen me cry, scream and stress out over my book for years and want to help. However, I'll accept donations from any supporters.

I'll be sure to share pictures and video from the conference here. I'm also planning to ramp up my blogging.

As always, thank you for reading!

P.S. For those who haven't seen it, below is a picture of my tattoo, which honors Prince and represents the importance of music in my life. Wow, it's almost been a year since Prince died. It has gotten easier, though I nearly cried listening to "Diamonds and Pearls" the other day. 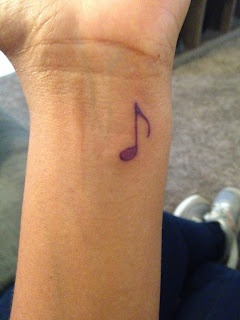