"Everybody back home thinks that I'm going to take the Al Green route." - D'Angelo

I referenced D'Angelo's spiritual journey in an earlier post. In my opinion, D'Angelo and Prince have faced similar challenges as highly-spiritual secular musicians. At some point in their lives and careers, these artists begin to feel the tension between their beliefs and their music, especially if they've incorporated sexuality into their songs.

Singer Al Green felt this tension, and decided to become a preacher and give up his secular music career (although he still performs his R&B hits from time to time). So, hearing D'Angelo say that some expect him to follow suit, I truly believe that he can relate to Prince and Green's struggle with the sacred and profane.

Marvin Gaye and Little Richard have also experienced that struggle. I'm writing about all of these remarkable and tortured artists in a section of my book. It has been so exciting to research them, and the artists who came before them. Even blues musicians were criticized for playing "the devil's music." African American artists have been conflicted about "good" vs. "evil" music for a long, long time. I love studying this topic!

D'Angelo has been top-of-mind because he recently released his first album in 14 years, Black Messiah. Like Prince, his music is rife with spiritual themes, and his latest record is no different. "Prayer" is the most blatantly spiritual track; he sings about the devil's influence. Prince has tackled the same subject many times in his career.

Compelling music from compelling artists--I live for this stuff!


What is your favorite track on "Black Messiah?"

So much has happened during the past three months. Basically, I didn't blog for a whole season. The good news is that I was busy writing and editing. I am finished with chapter nine!


Once my thesis committee reviews and approves my work, I will FINALLY have my master's degree from Ohio University's E.W. Scripps School of Journalism!

Additionally, while I was gone, Prince released two new albums! I purchased them right away, but I must confess that I haven't spent much time listening to them. It's really difficult to concentrate on present-day Prince when I'm writing about his past. I'm about to start researching the Batman era (1989).

During the fall, I also read Sheila E.'s book. I'll have more on that in a future blog post. Next week's entry will be about the singer D'Angelo, whom I wrote about several months ago. I have been consumed with his new album, Black Messiah. He and Prince have similar spiritual journeys, and there are plenty of religious themes on the album.

Thanks for your patience with me! Happy Holidays!
Posted by E. Thompson at 9:06 PM No comments:

"Fade to Black" - The Black Album

I turned in chapters seven and eight a couple weeks ago, and I am now writing about The Black Album era. The album is currently out of print, so I ordered a used copy from Amazon.com. 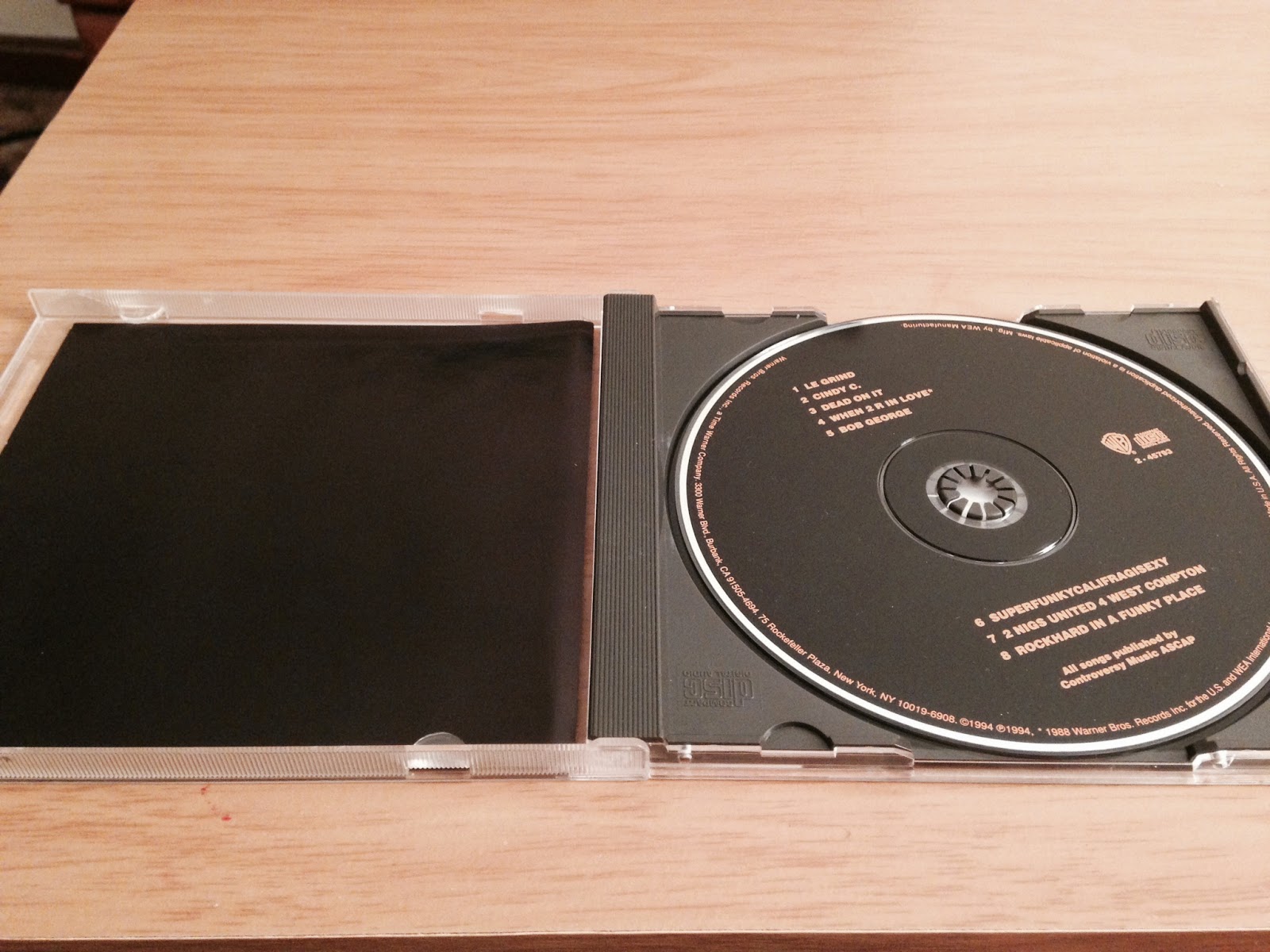 What a scary, disturbing, funky, odd, funny record! I'd heard bits and pieces of it, but it was a really cool experience to sit down and listen to it from beginning to end.

I think it's too early for me to designate any "favorite" tracks, but I can say that "Cindy C.," "Dead On It," "When 2 R In Love," and "Bob George" are prominent in my mind right now.

Good news: I recently completed another interview! I talked to Cheryl "Sonny" Thompson, Prince's production assistant and stagehand during the Rave Un2 the Year 2000 concert. It will be a while before I transcribe that interview because we didn't discuss anything relevant to the 1987-1988 period. Expect to see a blog entry on that later down the road.


What is your favorite track on The Black Album?
Posted by E. Thompson at 9:58 PM 2 comments:

"Eye Know there is a Heaven" - Interview with Craig Rice

"I don’t know how you can be around Prince and doubt the existence of God....You realize, 'Something else is going on here.'" - Craig Rice

After a month of anxiety, family emergencies and day-job assignments, I am back (for now). I can finally talk about my interview with Craig Rice. He was an assistant director on the Purple Rain film, road manager on the Purple Rain tour, and director for Prince's Paisley Park Enterprises. He also worked on Prince's Graffiti Bridge film.

It was a terrific interview. Rice provided a lot of insight into my topic. While some have questioned whether or not Prince had an actual struggle with the sacred and profane, Rice believed that the battle was real for Prince.

Additionally, Rice revealed why he thought Graffiti Bridge could have been a "better film."

Unlike some of the other people I've interviewed, Rice said that he actually had conversations about spirituality and God with Prince. He also had an interesting point of view about the large number of spiritual people in Prince's camp.

Finally, Rice doesn't believe that Prince felt pressured to keep up his sexual image for his fans. I was really surprised by that.

This interview was definitely one of my best yet! Rice was kind enough to put me in touch with some other people who worked with Prince. I hope to share more interviews with you in the near future!

As a writer, I feel that I need all the support that I can get. Because I understand the stress that comes with the profession, I try to support other writers.

Recently, I had the pleasure of chatting with K Nicola Dyes, who manages Dyes Got the Answers 2 Ur  ?s: The Beautiful Nights Blog. She was really friendly and helpful!

Check out Dyes' blog when you get a chance! She has a lot of great interviews with people who worked with Prince, including Susannah Melvoin, Cat Glover and Jill Jones.

Last week, I mentioned that I had an upcoming interview. Well, the interview was with Craig Rice, who worked with Prince on the Purple Rain film and tour, and on the Graffiti Bridge film. I had a great time speaking with him. I will have more on that next week.

I'm also currently writing chapter seven, though it's been really hard to focus lately. I hope to have the chapter finished by the end of the month.


What is your favorite interview about Prince?
Posted by E. Thompson at 1:00 PM No comments:

Look what came in the mail today! 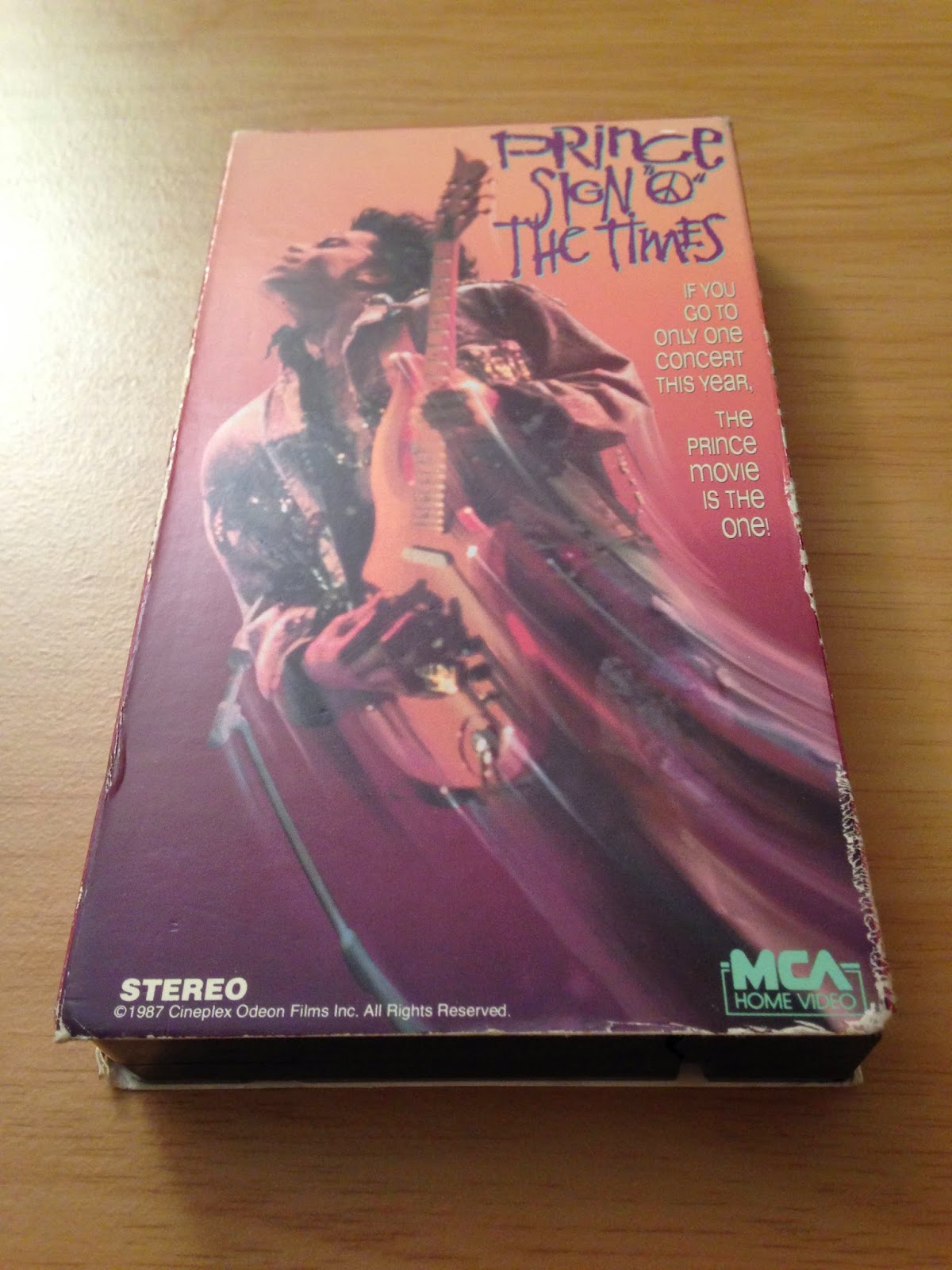 I have never seen Prince's Sign O' The Times concert film from 1987. I've heard great things, so I am extremely excited to watch it in the next couple weeks as I write chapter seven! I bought it on VHS because the DVD versions on Amazon.com looked unreliable. Luckily, I have a dual VCR and DVD player.

However, before I watch Sign O' The Times, I need to re-watch Under the Cherry Moon (1986). 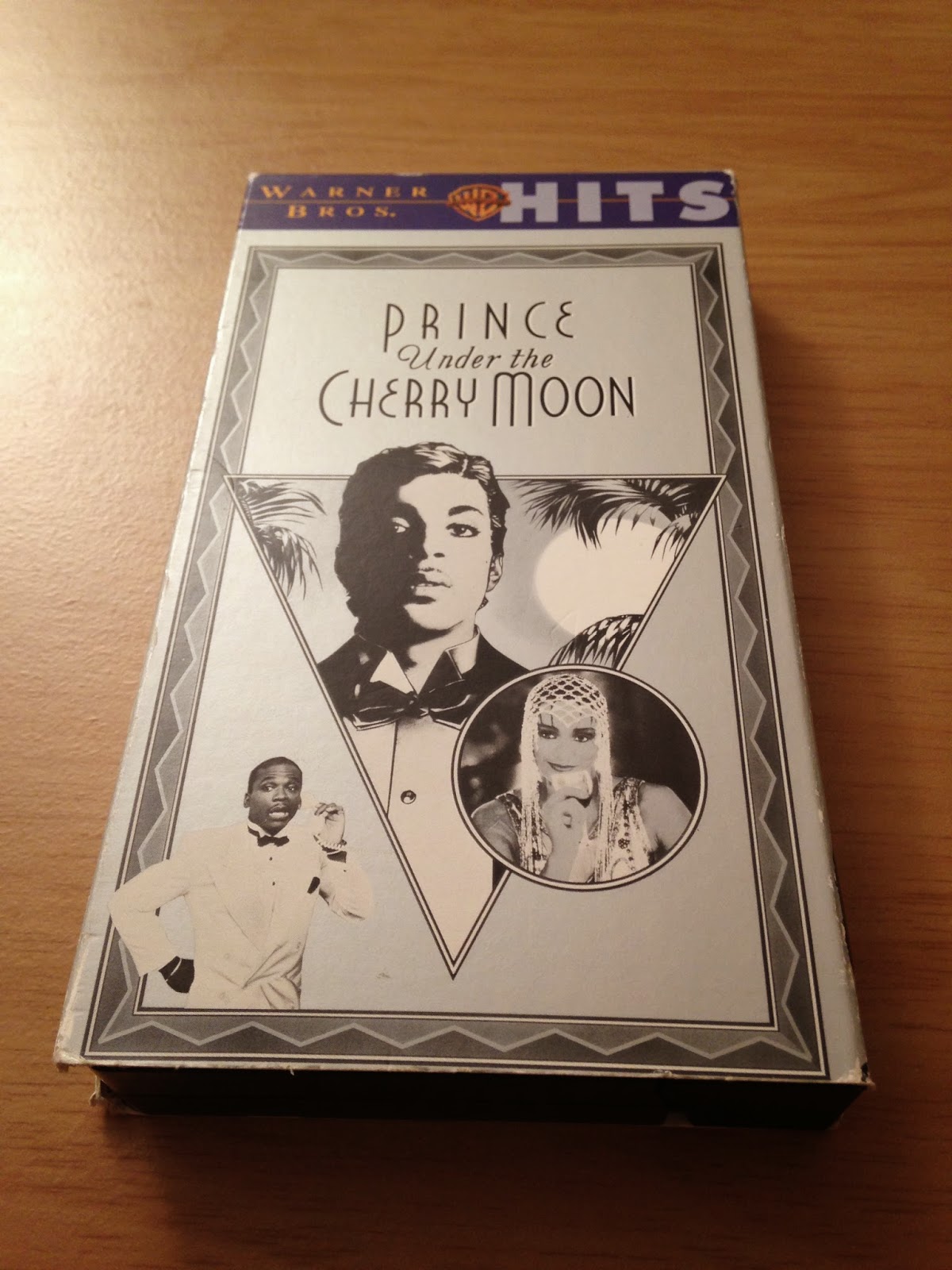 I was supposed to watch it over a year ago, but I never did. It's not my favorite film; I prefer Purple Rain and Graffiti Bridge. Maybe I will appreciate it more when I watch it this time around.

I also got a new copy of the soundtrack, Parade, in the mail on Monday. I love this album! 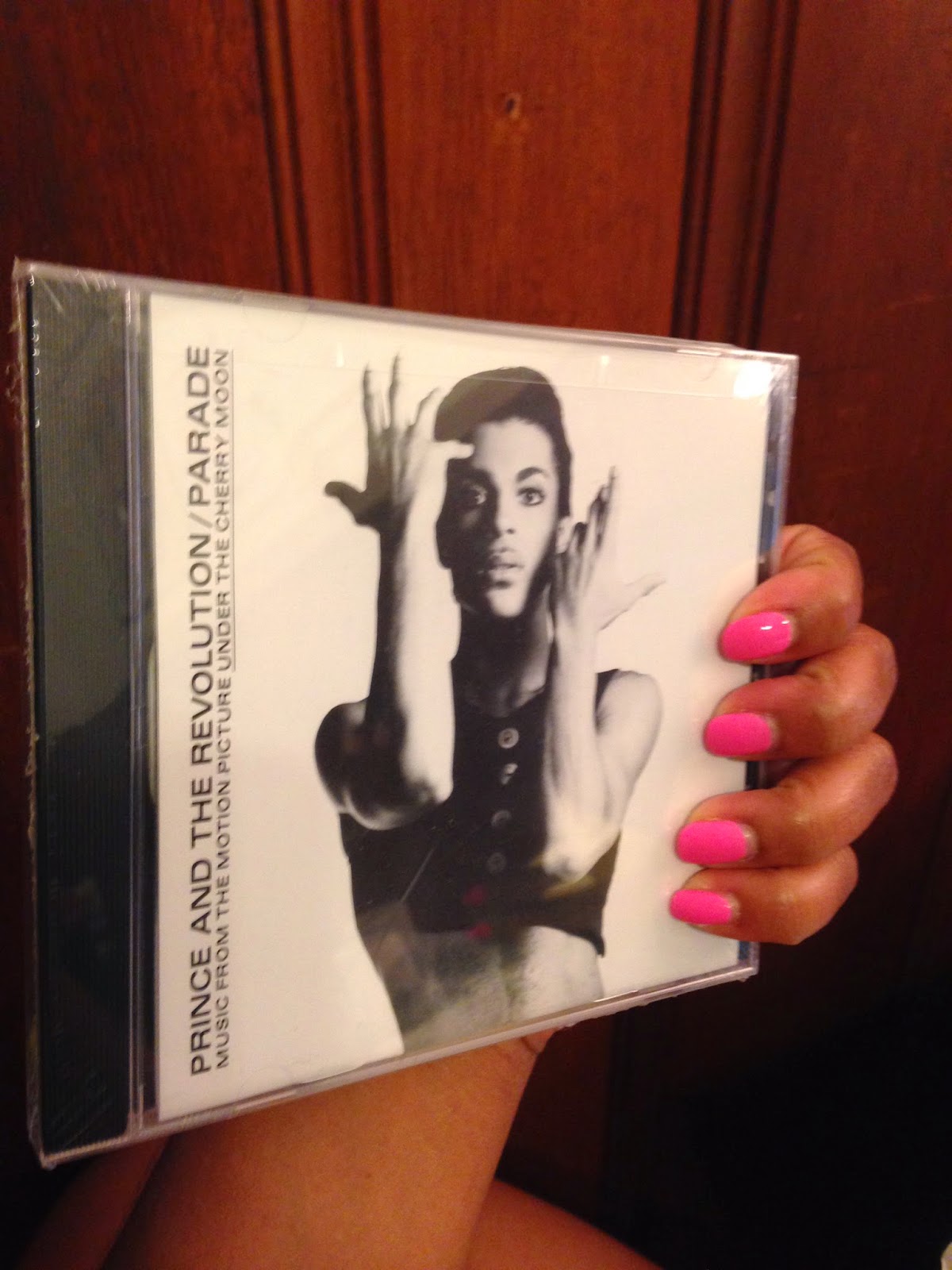 What did you think of the Sign O' The Times concert film?
Posted by E. Thompson at 10:25 PM No comments:

"You're Writing a Bio About Me?" - Chapter Six is Finished!

These three months have flown by! The good news is that I have been busy writing and requesting interviews. Since my last blog post, I have finished chapter five and chapter six!

Here is a shot of my work area: 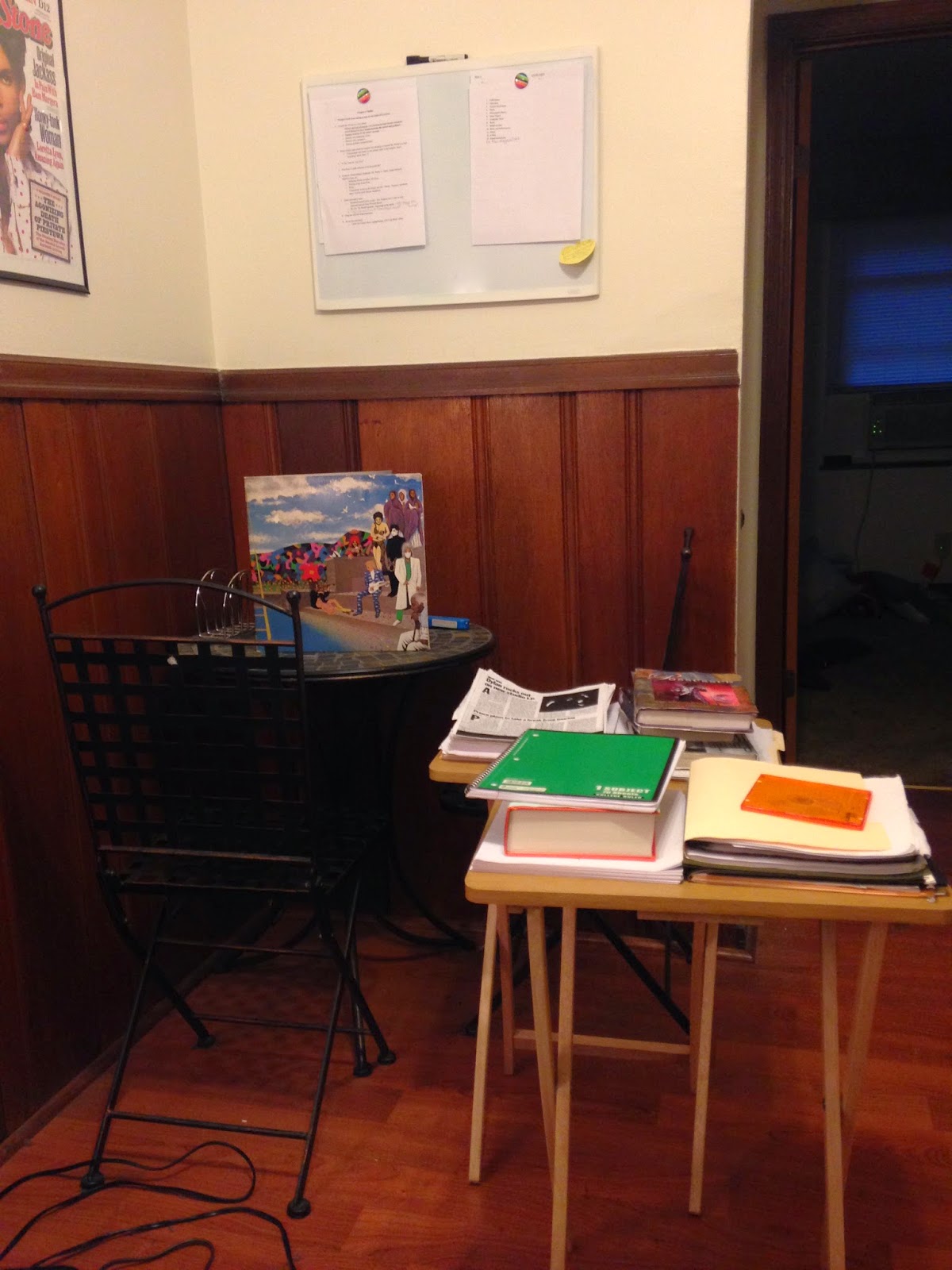 As you can see, I was studying the Around the World in a Day album. I will be writing about the Parade and Sign O' the Times eras for chapter seven.

I'm also excited to announce that I've lined up another interview! I will have a summary for you next month (if everything goes well, of course). My last interview was last fall, so I am ready!


What is your favorite track from Around the World in a Day?
Posted by E. Thompson at 6:22 PM No comments:

"I Got Two Sides, and They're Both Friends" - Another "Master of the Sacred and Profane"

I am back from a long hiatus. I wrote, went to Cancún, Mexico, for vacation, and wrote some more. I really want to be able to blog consistently, but if I have to choose between blogging and actually writing the book, I will always go with the latter.

With that said, I finished the section on other popular artists' spiritual journeys. That was a tough section because I had to rewrite it after I submitted it to my professor (I got a little carried away with the length). I also had to modify the list of artists. After reading about Stevie Wonder, I determined that his spiritual journey is not really comparable to Prince's spiritual journey. However, I did discover some similarities between Prince and another artist--D'Angelo.

"In his life and in his music, he has always felt the tension between the sacred and the profane, the darkness and the light." -- GQ

I added D'Angelo to the list of other artists covered in the book. I enjoyed learning more about him, and I hope that he releases new music soon!

I am currently finishing chapter five, which covers the Purple Rain era!

What is your favorite D'Angelo song?
Posted by E. Thompson at 7:17 PM No comments: 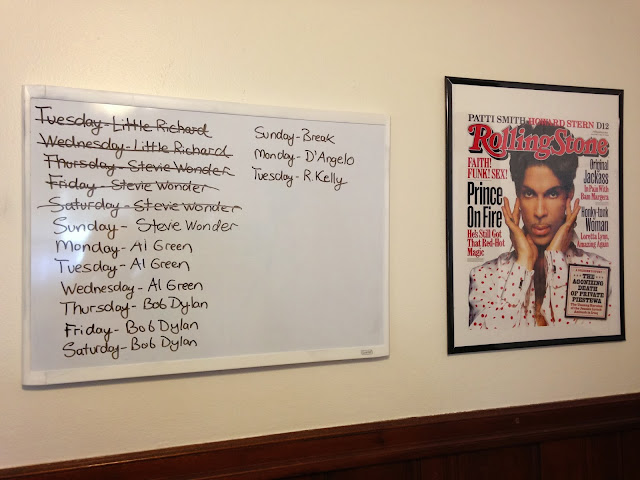 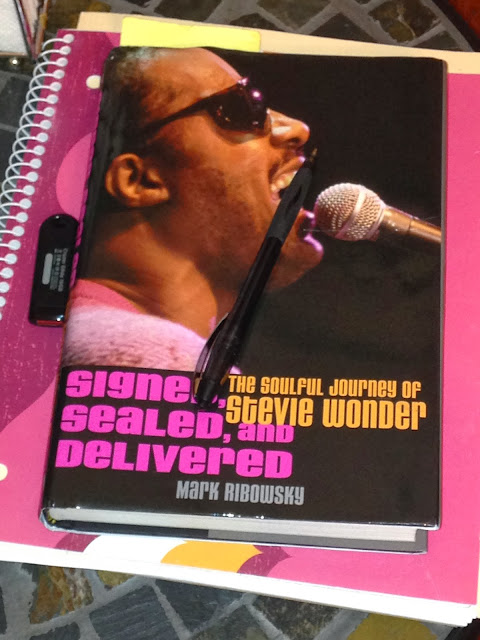 Peek at the long-term calendar... 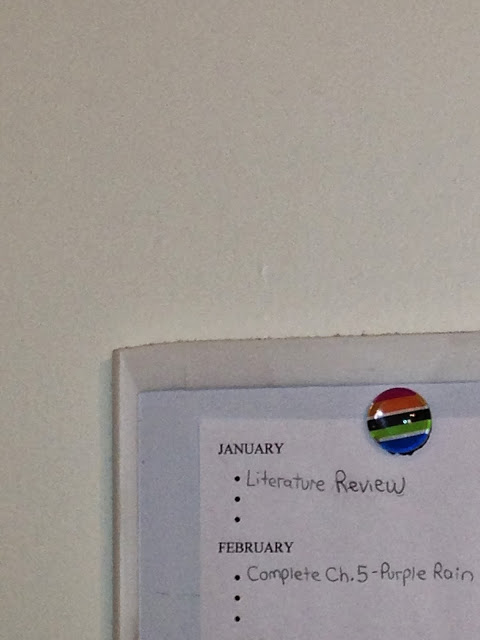 Peek at my professor's feedback on the first four chapters...