'And That Says What?' - Seven Memorable Quotes from the #1Plus1Plus1is3 Symposium 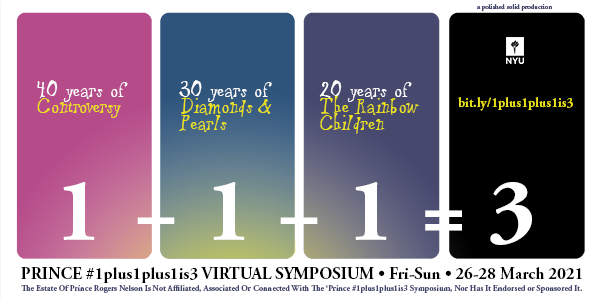 Another Prince symposium has come and gone! This year marks the fifth anniversary of the artist's passing, and there has been a wealth of academic scholarship on his art during this time. New York University Associate Vice Provost and professor De Angela L. Duff has been a leader in this space. Her latest event, the #1Plus1Plus1is3 symposium, did not disappoint.
Last weekend, we celebrated 40 years of Controversy, 30 years of Diamonds and Pearls, and 20 years of The Rainbow Children. I always enjoy reuniting with friends, gaining knowledge and listening to the special guests, which included Cbabi Bayoc, Dr. Fink, Sam Jennings, Peggy McCreary, Scott McCullough, Nicolay and Afshin Shahidi. You can learn more on the symposium website and keep watching Duff's YouTube channel for videos of presentations, panels and keynotes. Additionally, you can search the #1plus1plus1is3 hashtag on Twitter.

I also gave a presentation, "'1 + 1 + 1 Is 3' – Order, Discipline, Truth And Other Christian Values In Prince’s The Rainbow Children," which I will share later when the video was available.

In the past, I've done a roundup of takeaways from symposia, but I thought I'd do something a little different.

Below are seven memorable quotes from the event.

"Prince wasn't going to wake up one day and be Johnny Mathis." - Kamilah Cummings

Kamilah Cummings gave a remarkable presentation on Diamonds and Pearls and the myth of colorblindness in Prince's work. She argued that Prince was appealing to whiteness (to succeed in a racist music industry) during this era, and broke down several tactics he employed to meet that goal. She addressed some other strategies, like maintaining a connection to the Black audience. While Prince was never in danger of being dismissed by that audience (contrary to popular belief), he was intentional about the cultural representation in his work.

I wish some of the people who comment on the official Prince social media sites could hear Kamilah's presentation right now. #1plus1plus1is3 pic.twitter.com/dlakMRIvwv

Black people were not Prince's "props" during the '90s, "they were his setting and his home." - Melay Araya

Melay Araya's presentation on the music and videos of the Diamonds and Pearls era was a nice a complement to Cummings' work. Araya examined the presence of Black people in Prince's work during this time, highlighting the common theme of "Black people at play." I was very intrigued by her thoughts on Prince's "exploration of Black women's interiority." She bravely took on the topic of colorism in Prince's work and life, pointing out that Prince presented Black women in myriad roles--mother, friend, etc.--beyond that of the object of affection. I think there is so much more to say on this topic, and I would like to see a panel featuring Araya and Cummings in conversation. I'll just put this out there: I'm happy to moderate.

I think people like to shy away from something that was glaringly obvious. It doesn’t mean those of us who recognize it and see it for what it was disliked him or his music, it’s just something I wish people discussed more.

We can think of Prince's crossover as the "pursuit of resources versus assimilation." - Harold Pride

The topic of Prince's "crossover" to the "mainstream" came up during a brilliant panel, featuring C. Liegh McInnis, Kamilah Cummings, Mark Anthony Neal and Harold Pride--with input from Monique Morris. This subject is often discussed, but with little nuance and consideration of the systemic racism within the music industry. This group did a great job with it, even employing an effective metaphor that was transformative for the audience. I'm looking forward to seeing the video.

Group panel discussing this brilliant comment from @MoniqueWMorris: is it better to think about “crossover” in the sense it’s used in basketball (a strategy to throw off the opponent), rather than an unchallenged marker of success? #1plus1plus1is3

Crossover as Prince in pursuit of resources vs assimilation - Harold Pride pic.twitter.com/yJZ5Fih8sY

"We've had the power all along." - Laura Tiebert

I teared up multiple times during the symposium, and they were all during talks about Diamonds and Pearls. Something stirred in me when Cummings said the album was his "put some respect on my name" album. I also was touched by Tiebert's beautiful analysis of the album against the framework of The Wizard of Oz, which Prince credits in the liner notes. "Diamonds and Pearls is Prince’s declaration that while the journey down the yellow brick road to self-empowerment is filled with challenges, confidence and trust in ourselves is the key that will ultimately open the gates of Oz," Tiebert argued. I think I was reminded that Prince didn't have to do anything after the run that he had in '80s. Folks complain about his '90s work, but he was still operating on a genius level. He never stopped striving for excellence, and we never stop holding him to impossible standards. Still, he wanted to be an inspiration for all of us, and we will continue to learn from him even though he isn't physically here.

Despite its reputation as a commercial concession, D&P is actually a personal album, with Prince giving himself confidence after a difficult stretch of his career #1plus1plus1is3 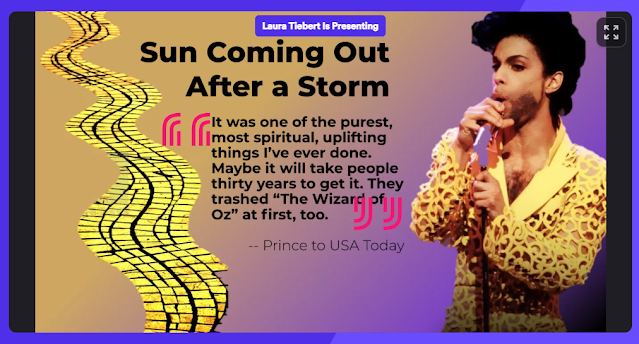 During the roundtable on Controversy, Dr. Joan Morgan simply articulated the way a lot of us feel: There is so much more to Prince beneath the surface, which is why we are fans and spend so much time studying him. Though I was a teenager when I became deeply interested in his music, he did not prompt me to interrogate myself as a sexual being the way he did for other fans in the 1980s. I discovered a more conservative Prince in the 2000s, and I connected with his music on a spiritual level. However, he is so much more to me beyond spirituality and even beyond the music. I do wonder if my relationship would have been different if I grew up in the 1980s.

I also appreciated Dr. Morgan's perspective on Prince and queerness.

"When Prince died, I ran to the Apollo."

Appreciated @milfinainteasy's descriptions of folks who would not normally be discussing Prince/gender/fluidity freely singing the lyrics of "Controversy" ... & the realization that Prince was on some "next-level shit." #1plus1plus1is3

Ready to move past the gay/straight question when it comes to Prince. When I inquire about "queerness," I'm digging into something more expansive. It's not my area of expertise. I want to hear from scholars on where they think the research should go from here. #1plus1plus1is3

"The Hero's Journey is a continuous loop. Very broadly, you could argue that loops within Prince's journey each have a seven-year arc."

Edgar Kruize offered a fascinating presentation, analyzing Prince's career against the framework of "The Hero's Journey," popularized by American literature professor Joseph Campbell. I'm definitely planning to return to this thought-provoking analysis. You can watch for yourself below.

This was a comment in the chat during The Rainbow Children roundtable. I appreciated this group of scholars tackling one of their least favorite albums. I think they shared some thoughtful criticisms and tried to find some redemption. One of the most interesting discussions was around Prince's approach to jazz. Why did he choose certain musicians like Najee or Renato Neto? How did that affect his sound? I'd love to hear a panel of musicians talk about this further. What was Prince doing with the Madhouse records (jazz fusion?) versus The Rainbow Children, One Nite Alone, N.E.W.S. and Xpectation? Which musical styles did he "master," and which ones were part of experiments?

Literally crying at this tweet out of nowhere. lol

If you want to donate toward paying guest writers, purchasing products for giveaways, or acquiring research materials, my cash app is $ericawrites.