"He was always a spiritual seeker ... fascinated enough in all possibilites to integrate the signs of the zodiac and third eye and reincarnation into the Christian beliefs his Baptist mother and Seventh-Day Adventist father had exposed him to. He was way too smart to be sucked into something just because he was vulnerable in that moment." 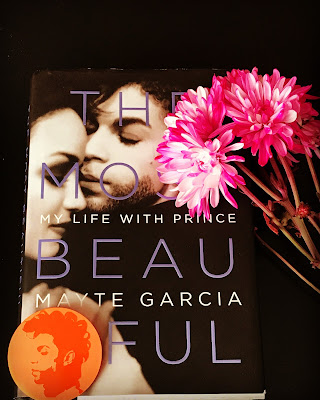 I've been wanting to interview Prince's first wife, Mayte Garcia, since 2012, when I saw her on "Hollywood Exes." I was suprised by how much I enjoyed watching the show. (Click here to read my blog entry on the series.) Sometimes I get lucky and track down a source even after years of trying. At this point, I don't think a chat with Garcia will happen.

Fortunately, I have her book, The Most Beautiful: My Life with Prince. I finally read it and I honestly think she answered all of my questions regarding his spirtuality, unless she held something back (hit me up if there's more, Mayte). I interviewed Larry Graham about Prince's conversion to the Jehovah's Witness faith, but it's nice to have another perspective on that transition--especially from someone who doesn't believe in the doctrine.

But Garcia also expounds on Prince's interest in Egyptology and some aspects of eastern religions prior to his conversion. I think this is a fascinating period in the artist's life (the early '90s) and at this point in my research, I think he was beginning to return to some of those interests before he died.

Overall, I think The Most Beautiful is a wonderful book. It's well-written, and, like "Hollywood Exes," showcases Garcia's charming personality. That isn't to say there weren't parts that made me uncomfortable. I was also felt incredible sadness and compassion for she and Prince while reading about the death of their son, Amiir. At times I almost stopped reading.

The book also opened my eyes to the full extent of Garcia's influence on Prince's music in the 1990s. Of course he had other muses; Garcia even admitted, "I know of at least three women besides me who believe ['The Most Beautiful Girl in the World'] was written specifically for them" (and I interviewed one of those women, but that's another blog entry). But Garcia was a mainstay onstage, in videos and argubly in his lyrics for much of that decade.

I also enjoyed her detailed descriptions of shows like their performance at the 1995 American Music Awards (with Prince's classic gum-chewing), and interviews with Oprah and Sinbad. I liked being able to go back and watch knowing what was going on behind the scenes.

Discussing Garcia's book also made me think about fandom, particularly its dark side. Some Prince fans absolutely despise her and her decision to publish the book. And when confronted with some of Prince's less than desirable actions described in the book (or, really, by any other source), some fans defend him to the point of delusion--or almost as if the women in his life deserved any poor treatment they received.

Now, of course, I am guilty of taking Prince's side on some things or rolling my eyes at certain people who knew him. But sometimes I need to check myself, and Garcia's book--in addtion to the process of writing this biography--helped me realize that. I would like to think I am learning to have more empathy for people in Prince's world and I don't think I allow my admiration for the late superstar to prevent me from viewing him as a human being with strengths and flaws--just like the rest of us.