"Let's stop and take a moment to look at yourself. There is nothing minor about you. You are a blessed people. You're the most talented on Earth and you are still grateful. That is why upon winning in their game, you always thank God. Tonight, I would like to ask one favor of you. Imagine what it would be like in our own game."


In December, the Howard Journal of Communications published a special Prince issue, "Centering race in the life and work of 'The Purple One.'" The icon's racial politics are examined through a collection of papers covering everything from his stance on intellectual property to his depiction of the black experience in music videos. 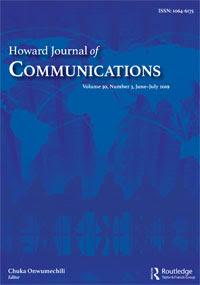 "It is critical that we strive to ensure that the legacy and essence of Prince not be viewed solely through a hegemonic lens, highlighting him as a man who transcended race;" editors Kimberly R. Moffitt and W. Russell Robinson write in the intro, "But instead, as a musical genius we believe embodied his blackness as a forethought, not an afterthought to his authentic self."

Moffitt and Robinson were inspired to create this issue at the 2017 Purple Reign Conference, where they presented their work, "Transgressions in Purple: The Prince Protest Mixtape, Vol. 1," at the University of Salford. During the week, they said they noticed emphasis placed on Prince's universal appeal, while his race was minimized.

I don't recall feeling that way at that particular conference (I presented on spirituality), but as I've participated in more academic events, engaged with fans online and consumed new articles on Prince, I've noticed a troubling whitewashing of his image.

That is why I was so thrilled to discover this special issue of the Howard Journal of Communications. The scholars have produced significant, thought-provoking writing on Prince and race. Honestly, I feel it should be required reading for fans interested in understanding Prince's motivations. And I would love to see versions of these pieces created for mainstream publications and websites (Essence, The Atlantic, etc.) so casual fans of Prince and/or popular music have access to this information.

Unfortunately, Prince's heyday preceded two developments: A greater amount of black writers employed at media outlets (though still not nearly enough) and the advent of the internet "think piece." Today, each time Beyonce releases new music or visuals, there is so much intelligent analysis on her symbolism and other messaging--and it always centers her blackness. We barely had that in real time for Prince's output. That's why so many of us are pushing for it now.

This journal issue impacted me emotionally and intellectually, and allowed me to examine some of the problematic, race-based messages that even I had internalized about Prince. I will need to spend more time with the issue to fully digest its contents, but here are several immediate takeaways from my first reading.

Kamilah Cummings' brilliant and exhaustive paper, "Sisters in the Shadows: an Examination of Prince's 'Strange Relationship' with Black Women," is the content I have been craving for a while. It has been unsettling to see the erasure of black women in Prince's legacy in both scholarship and mainstream media.

And we now have scholars like Cummings who can go back and analyze and synthesize Prince's lyrics, visuals, interviews, selection of musicians and vocalists, as well as other decisions--which we've had in front of us all along--to demonstrate just how much Prince elevated black women.

None of this is to say Prince was perfect and didn't evolve in some of his viewpoints or ways of expressing his support of black women. Cummings addresses that growth, and ultimately accomplishes her goal to present Prince's support of black women "as an indisputable example of his love of not only black women but of his own blackness and the black community."

2. Prince's spiritual messages intersect with his messages about race.

When it comes to spirituality, Prince loved to talk in code. He has confirmed "de-elevator" means the devil in "Let's Go Crazy." He's given enough context clues for fans to make an educated guess that "Spooky Electric"--referenced on the Lovesexy album--is the devil. In "Anna Stesia," he reminded us that "God is love," which would cause one to interpret his future use of the word ("Let love guide you to the Purple Rain;" "Love opened its arms;" "Live 4 Love") as a code for the deity. I could go on and on.

But this journal opened my eyes to the possibility that Prince's descriptions of spiritual paradises are promises of liberation for black people, specifically. In his paper, "Purple Visions of Blackness: Prince's Expansion of the Depictions of Black Experiences Though His Music Videos," Sedrick Smith cites videos like "Holy River" And "Betcha By Golly Wow" to demonstrate Prince's hopes for black people.

As a result, I've been inspired to think about Prince's references to the "new world" and "afterworld" as more than Christian-based views of heaven. I'm reminded that some of Prince's most religious projects are also his most pro-black. The Rainbow Children, with its Jehovah's Witness doctrine mixed with messaging about the evils of slavery ("Muse 2 the Pharaoh," "Family Name"), is a prime example.

Prince's practice also brings to mind African American slaves' practice of using spirituals as texts for liberation from oppression. A day before I read this journal, I interviewed one of Prince's black employees, who interpreted songs like "Beautiful, Loved and Blessed" as being directed toward black people, even though the lyrics do not explicitly reference them. I do not take that as a coincidence.

3. Prince's name change to the Love Symbol is a commentary on the effects of chattel slavery.

This conclusion seems straightforward enough; after all, Prince did write the word "slave" on his face while challenging Warner Bros.' control over his creativity and ownership of his master recordings. But Anjali Vats' paper, "Prince of Intellectual Property: On Creatorship, Ownership, and Black Capitalism in Purple Afterworlds (Prince in/as Blackness)," delved deeper into the ways Prince signaled the damaging and lasting effects of slave owners re-naming African Americans.

The practice deprived black people of their right to keep their given, African name, and stripped them of their personhood and identity. It also provided white slave owners with "parental authority." Remade as property, black people's labor built wealth for the sole benefit of white people.

"The moniker 'Prince' became a corporate entity, a brand decoupled from the person," Vats writes. And Warner Brothers had authority and ownership over the music produced under that brand. Therefore, Prince's name change provided a freedom his ancestors were not able to experience.

Vats points out how the unspeakable and "empty" signifier is a fitting name for a brand that yields zero profit for Warner Bros. Furthermore, the writer brilliantly links the record label's inability to decipher the Love Symbol to illiteracy rates among black people in the aftermath of slavery. Unlike his ancestors, Prince was able to "best" his masters, "whose literacy did not match that of their star artist," Vats writes.

Prince could not totally prevent white control through naming. Reminded of the condescension and superiority slave masters exhibited while branding black people (literally and figuratively), I realized how hurtful media's nicknames may have been to Prince--especially when it came from another black person. With that in mind, Prince's song "Billy Jack Bitch," in response to gossip columnist C.J.'s "Symbolina" nickname, takes on a new meaning for me.

"What if I called you silly names/Just like the ones that you call me?" Prince sings. "What if I told you that you're worth/Only half of what you be?"

That last line is particularly chilling, given the history of subjugation of black people upon coming to America to be renamed, enslaved and oppressed.

This entire special issue does a remarkable job of highlighting how Prince's image, behavior and business decisions reveal the expansive nature of blackness. For example, Prince's refusal to be included in Warner Bros.' R&B catalog was not an attempt to transcend race, but to demand greater respect as a black artist.

"[It] was an important act of claiming equality of creatorship and ownership, one that pushed back
against the notion that black art was and is inferior and deviant as compared to white
art," Vats writes.

Similarly, when Prince presented multiracial utopias ("Uptown," "Paisley Park"), he was advocating for equal participation in society for the black race.

As the articles lay out, Prince moved beyond stereotypes of black masculinity (dressing in traditionally feminine attire and showing vulnerability in lyrics); the black experience in many of his videos (eschewing violent, criminal depictions) and black women in lyrics (pushing back against demeaning language used by hip-hop artists). But that was to demonstrate that black people could be shown in more than one way.

By fighting for independence from his record label, referencing the exploitation of black artists before him, encouraging younger black artists to avoid record deals and emphasizing the power of black ownership across all industries, Prince was dedicated to expanding the current reality of being black in America.


"The system is broken. It's going to take the young people to fix it this time. We need new ideas, new life. ... The next time I come to Baltimore I want to stay in a hotel owned by you." - Prince, Baltimore 'Rally 4 Peace' concert (2015)

"What he showcased throughout his career was that blackness could be infinite, equally as unbound by convention as music could be," K.T. Whiteneir writes in his paper, "Dig if you will the Picture: Prince's Subversion of Hegemonic Black Masculinity, and the Fallacy of Racial Transcendence."

"Rather than defining it as transcendent, and unintentionally dismiss a critical aspect of the artist and his work due to a limited scope of analytic vision, we as scholars and consumers are responsible for digging deeper into the artist's intent and expanding our own critical lenses if we are to engage with the sophistication of his work."