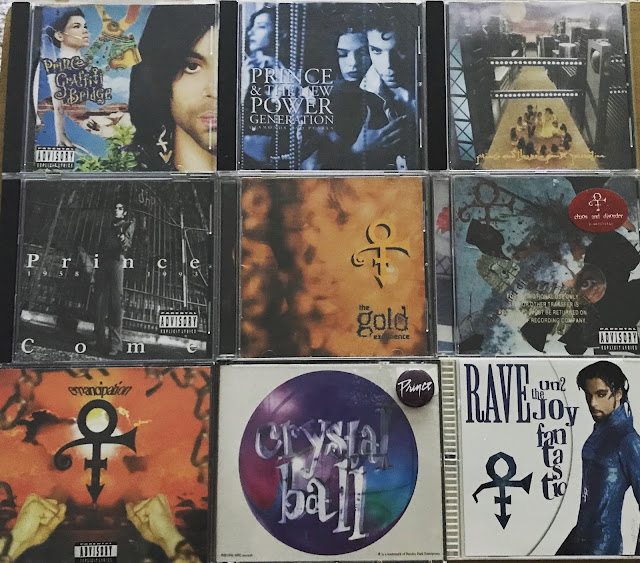 Back in 2015, I attempted to identify my favorite song from each of Prince's albums from 1978 to 1990. I might make different choices today, but I'll let that list stand.

I thought I'd continue that series by sharing my selections from his 1990s albums.

1. Graffiti Bridge (1990): "The Question of U." What a bloody fight between that, "Joy in Repetition" and "Elephants & Flowers." "The Question of U" is just so intriguing due to the dark mood, voice effects and hand claps.

2. Diamonds and Pearls (1991): "Thunder." If you'd asked me this question about 20 years ago at the beginning of my fandom, I would've said "Willing and Able." But I've grown to love this album so much more since then. "Live 4 Love" is such a burst of energy--largely due to Michael Bland's drumming--but I have to give it to "Thunder," which is a genius composition. You can also pull no less than three interpretations from the lyrics.

3. Love Symbol (1992): "Love 2 the 9's." Unpopular opinion for sure. Yes, I know "7" is on this album. "The Sacrifice of Victor" is also a fierce competitor (I often rewind it just to hear the harmony on "Amen" at the end). This is another album that has grown on me, and I think it's one of his strongest from the decade. "Love 2 the 9's" just makes me happy; Prince was so good at capturing pure joy in his compositions.

4. Come (1994): "Papa." I read about this song before I ever heard it. I don't know what I was expecting, but it certainly wasn't the ominous music and heavy, allegedly personal lyrics. It's one of his most unique songs, and the end tugs at my heart every time. "If you love somebody, your life won't be in vain."

5. The Black Album (1994): "Bob George." I don't have a strong personal connection to this album. I have grown to appreciate it, especially through hearing analysis from black scholars on its cultural significance. "Bob George" is Prince at his funniest and quirkiest.

6. The Gold Experience (1995): "Shy." Why am I subjecting myself to this exercise? It's painful to make these choices, but the bass and guitar parts on this track are so interesting (please listen closely in your headphones). I am also a sucker for Prince showing off his Sly Stone-esque vocal ad libs. And it's really great songwriting; the lyrics are creative and vague, so you can have fun filling in the holes. "Cool, dark skin and hot virgin white..."

7. Chaos and Disorder (1996): "The Same December." Break out the tambourines! My favorite part of this song is the gospel music-inspired outro. He switches up the groove multiple times throughout this song, and it's all very delicious. There are also thought-provoking lyrics about unity and the power of perception: "You only see what your heart will show."

8. Emancipation (1996): "Jam of the Year." This is an underrated gem. In the past, it took me a while to comb through this three-disc album and appreciate the songs. However, I instantly loved the laid back groove of "Jam of the Year," along with Rosie Gaines' amazing riffs. Just recently, while listening with headphones, I noticed some ad libs by Prince that I never caught before. That happens a lot with his music.

9. Crystal Ball (1998): "Crystal Ball." I'm not a huge fan of this album, but there are a few tracks I'll play from time to time. The title song, recorded back in 1986, is a 10-minute opus combining all the familiar Prince elements--war, sex and Jesus--over an orchestral arrangement by Clare Fischer. I also have some deeper thoughts about Prince's crystal ball imagery that I'll share in my book.

10. The Truth (1998): "Animal Kingdom." This is one of Prince's top ten albums of all time. I can say that with confidence. When I was younger, I never had any bootlegs of Prince music, so I didn't even know he had a lot of acoustic tunes before I found this project at Half Price Books. I have such a personal relationship with all of these songs. As the years have passed, I find myself drawn to "Animal Kingdom." Prince managed to make a really eccentric song that is still soulful as hell (again, please listen closely to his vocal ad libs).

11. The Vault: Old Friends 4 Sale (1999): "Old Friends 4 Sale." More times than not, Prince's re-worked versions of songs are inferior to the original versions. This iteration is an exception; to me, it's equally as strong as the 1985 version. The orchestration is beautiful, and I will always be a sucker for recordings that feature Prince doing soulful vocal ad libs (as you may have gathered by reading this list).

12. Rave Un2 the Joy Fantastic (1999): "The Greatest Romance Ever Sold." This album is a contender for my least favorite Prince project of all time. This song is one of its few gems. It's R&B with an Arabic flavor and Biblical lyrics--all things that I love. Plus, I'll always remember seeing this video when I was a young teenager and thinking, "This sounds good but he's ... odd."


Can you pick just one favorite song from each '90s album? Please comment with your lists below!