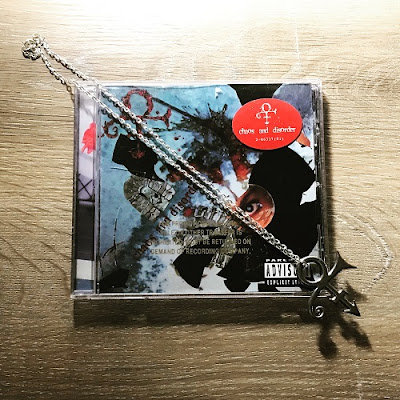 I've been listening to Prince's 1996 contractual obligation ... er ... album Chaos and Disorder this week. I don't think it's an essential listen, but it's certainly better than its reputation. And it's always nice to hear Rosie Gaines singing with Prince. Honestly, there are gems on all of his albums.

Chaos and Disorder is commended for its rock sound, but I think Prince has better material in that genre on other albums. My favorite rocker on here is the bluesy "Zannalee," which was originally slated for The Undertaker, a much better project that I wish had been released in Guitar World in 1993 as planned. (Psst! Prince Estate, there's still time to partner with the publication to do this, and a dope writer can interview musicians Sonny T. and Michael Bland about it again.) Additionally, you would expect a song like "I Rock, Therefore I Am" to smolder, but it's underwhelming.

A lot of people prefer the only single, "Dinner with Delores," and it's a pleasant song. However, I never find myself playing this unless I'm purposely engaging the entire album. It's better live; Prince gave a great performance of the track and "Zannalee" on the "Today" show's "Summer Concert Series" in 1996. The audience was really diverse and I actually teared up watching some of them cry. And I always love to see Bryant Gumble and Prince interacting; you can tell they had a lot of respect for each other. (Try not to wince, though, when Katie Couric calls the superstar Prince instead of his new name.)

My favorite song on the album is "The Same December," because of its catchy chorus, full sound and gospel outro. Also, the lyrics are very thoughtful:

"You only see what your heart will show
You only love when your soul remembers
We all come from the same December
And in the end, that's where we'll go"

Prince often talked about perception, and people's habit of projecting their own beliefs or desires on things they witness or consume.

“If you looked at that picture [on Lovesexy] and some ill come out your mouth, then that’s what you are—it’s looking right back at you in the mirror.” - Prince, 1990

There are also spiritual concepts running through the song, including reincarnation and the theory of returning to the Source (God or absolute, eternal reality)--which were in line with what Prince was studying at the time. Similar themes are also found on Chaos and Disorder's "Into the Light," which was inspired by author Betty Eadie's book, Embraced by the Light, about her near-death experience. (Influenced by Biblical text, Prince often used "light" as a symbol for God and/or Jesus throughout his career.)

The last track on the album, "Had U," is a popular topic of discussion; it's rumored to be a thinly veiled kiss-off to Warner Bros. It's interesting to me because I can hear all of the opportunities for Prince to elaborate on the melody and elevate the song to something great, but that's not the point. He was done giving the record label his best material, and the frustration I feel at the abrupt ending is something I'm sure he anticipated. Like he says on "Dinner with Delores," "No more, that's the end."

What are your favorite tracks on Chaos and Disorder?