"Do You Like What You See?" - Prince's Music Videos

For my book, I analyze Prince’s albums, performances and music videos. I think I’ve been doing a decent job keeping track of the latter, but I think I’ve missed some. As many Prince fans know, the artist has shot a ton of footage; some of it was released to TV networks or online, and some of it was released only on DVD or through special subscriptions. So, it takes a lot of effort to keep up.

On several occasions, I’ve listened to the Peach & Black Podcast (shout out to the fellas—I LOVE their reviews), and heard them reference a music video that I didn’t even know existed. So, I’m going to have to go back and revise my running list of Prince’s music videos.

While I’m on this topic, I thought it would be fun to share my favorite Prince music video. It took me a while to figure it out, not because there are so many that I love (sorry, P), but because I never really got into them. I prefer polished productions by artists like Michael Jackson (my favorite “short film” is "Smooth Criminal").

However, I do appreciate the “live” feel of Prince’s music videos; most of them show him performing in concert. This makes sense; he’s a superb instrumentalist, and that quality should be emphasized. My favorite is “Willing in Able,” from the "Diamonds and Pearls" era, circa 1991. I didn’t see the video until my mom bought me the "Prince and the New Power Generation Diamonds and Pearls Video Collection" on DVD for Christmas a few years ago. 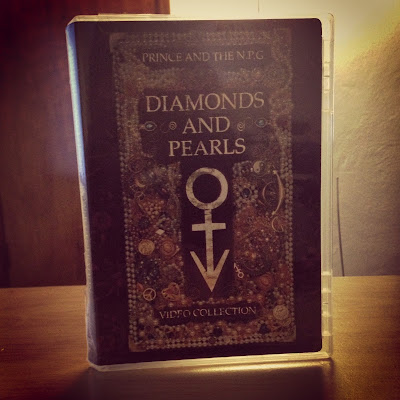 I adore the album version of the song, but the video includes a slightly different arrangement. The live performance is electrifying! Prince’s vocals are incredible, and the NPG band and The Steeles are on fire! I also love Prince's dancing and his appearance (when I forced my boyfriend to watch it, his first words were, “What is he wearing?”). I would embed or link to the video, but I don’t want to get myself or anyone in trouble. You should be able to find it, though. ;)

What is your favorite Prince music video?
Posted by E. Thompson at 8:38 PM