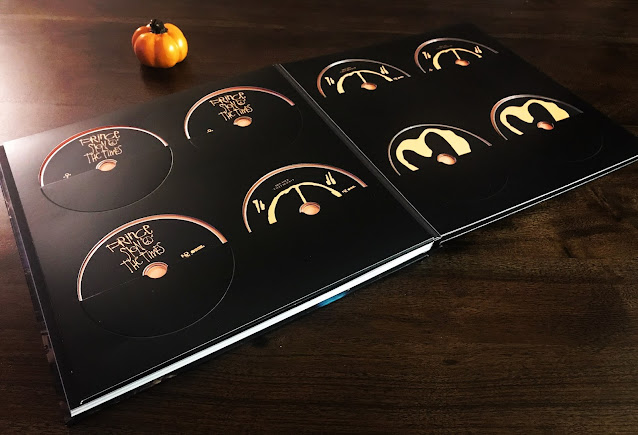 The Super Deluxe edition of Prince's Sign O' the Times album is sitting pretty on my coffee table. I tried my best to ignore all of the reviews, essays and Twitter commentary around the release because it was important that I experience it for myself. When you're an active part of a fan community, your opinion of the artist and the art can be colored by perceptions other than your own. I've been struggling with this internally for a while now. I wanted to get back to thinking about my personal connection to Prince's work.

It's going to take a long time to process this beautiful box set, so I thought I'd just focus on the vault (or previously unreleased) tracks. I haven't spent as much time with these songs as the rest of the hardcore fans. I've been discovering them over the past few years as I do research for my book. I used to feel bad about that, but I'm over that guilt. I didn't have a community or access when I started seriously listening to Prince, and I didn't immediately know about the NPG Music Club. Also, he'd scrubbed the internet of his music.

With that said, I wonder if the three vault tracks that immediately stood out to me are songs some folks are tired of by now. Anyhow, here they are (ranked).

The first time I learned about the 1957 Billy Wilder film, Witness for the Prosecution, I was looking at the lineup of the 2019 "Summer Movie Series" at the historic Ohio Theatre in Columbus, Ohio. Right away, I shrieked, "That's a Prince song!" Because I had just been pondering Prince's fascination with the movie Barbarella and its director, Roger Vadim, I was thinking that perhaps there was a similar connection to Witness, but I don't think so. Now, if some folks out there saw this film on a loop at Paisley Park, let me know!

When it comes to background vocals on Prince songs, I prefer that he sing them, or employ a certain type of soulful vocalist. I'll always promote the underrated 20Ten album because singers Shelby J., Elisa Fiorillo and Liv Warfield created wonderful harmonies for him. So, I was pleasantly surprised that I dug what Lisa Coleman, Wendy Melvoin and Susannah Melvoin achieved on "Witness 4 the Prosecution (version 1)." The thick wall of vocals is one of the best parts of the tune. They worked hard, and it shows.

"I do remember being in the room singing those background vocals and getting up really high, trying to work that vibrato," Coleman said.

The other standout is that haunting bass and horn line that repeats throughout the song.

"Imagine being so dope you can afford to sit on 'Rebirth of the Flesh.'"

Imagine being so dope you can afford to sit on "Rebirth of the Flesh." #Prince

I tweeted this recently, and it looks like 99 Prince fans agree. This is one of the funkiest jams he's ever produced, but he's so talented and prolific that he could sleep at night leaving it in the vault. Perhaps he knew people would not be able to recover if he put this out on the aborted Camille project, which, to me, is better than The Black Album. I really wanted the Prince Estate to release Camille with his original artwork, but I'll just have to create it for myself. Thank goodness I don't have to go to YouTube and listen to that subpar version anymore.

Prince also brilliantly utilized religious imagery to describe his musical transformation after disbanding the Revolution. According to the Bible, "That which is born of the flesh is flesh; and that which is born of the Spirit is spirit." (John 3:6). Each human is born into sinful nature, but there is an opportunity to experience a spiritual rebirth and attain everlasting life through belief in Jesus Christ. At this time, Prince was also being more direct about his Christian views, so the title of the song is very fitting. It wasn't the first time he referenced "the flesh," and it wouldn't be last. (I will write a separate blog on Sign O' the Times and spirituality later.)

It's the off-beat syncopation for me. The drums are the highlight of this song, which is unconventional and complex in every way. Not only is Prince switching between his lower and falsetto registers, but he has arranged the vocal lines so that they are in conversation with each other instead of harmonizing on a single melody. You have no idea where he's going to go next. Even his guitar solo goes in a direction I didn't initially expect. Finally, the sound is just so massive. Quite simply, it's a masterpiece.

(Going over the lyrics, I came up with a theory about the subject of the song, but I'll keep it to myself because, who knows?)

Prince also created a version for Sheila E., whose commentary, I must say, is glaringly absent from this box set and its promotion. Does anyone know why? I want to hear your valuable input on the music, Sheila!