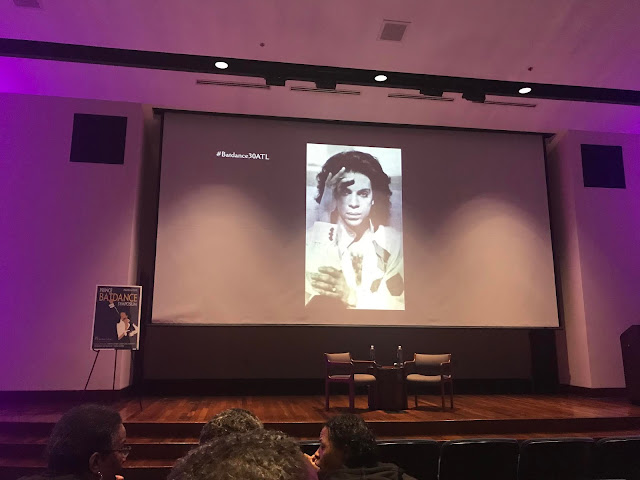 Last weekend, I had the honor of participating in the Prince Batdance Symposium--a celebration of the 30th anniversary of Prince's Batman soundtrack--at Spelman college. I moderated a panel of scholars presenting on Prince's image and style. It's hard to believe this was the fourth Prince conference I've attended in two years. It never gets stale, though.

Here are my top four takeaways from the event.

1) Prince's powerful, ongoing impact on his employees, friends and fans

Day one of the symposium featured a live interview with Chuck Zwicky, Prince's engineer during the late 1980s. There were many gems in the conversation, including a funny story about the song "Shall We Dance," which ultimately went to Prince's bass player, Brown Mark.

I also enjoyed hearing Zwicky's opinion of Prince's song, "Xtraloveable." He remembered complimenting Prince on the early version, but was disappointed when Prince re-cut it into a "Vegas tune." Additionally, Zwicky offered interesting commentary on the way Prince recorded background vocals; he said Prince seemed to place more of an emphasis on creating "different personalities," rather than perfect harmonies.


I appreciated hearing Zwicky's candor regarding Paisley Park; he feels it should be a working studio rather than a museum.

But above all, I was most affected by Zwicky's recounting of a "lucid dream" he had about Prince prior to the symposium. In the last few weeks, I've heard two other people who knew Prince talk about him sending them messages through dreams.

Though people like Zwicky haven't worked for Prince for 30 years, they still seem very much connected to him. It really speaks to Prince's boundless influence across time and distance.

My older sister attended some of the symposium on day two. As she was explaining how nice it felt to be at Spelman, I had a realization: I was completely comfortable during the entire weekend. I was not consciously aware of my blackness as I typically am in almost every other environment, because most of the scholars looked like me.

By hosting the event at a HBCU and including black scholars, it was virtually guaranteed that presenters would be comfortable and knowledgeable enough to incorporate Prince's blackness into their discussions. That is extremely significant for two reasons. One: Prince's blackness was important to him, and informed many of his artistic, charitable and political decisions. Two: Much of what has been published about Prince excludes this aspect of his humanity and art.

A standout moment for me was when Dereca Blackmon referenced the 1981 New York Times article, "Is Prince leading Music to a True Biracism?" I've cited this piece as evidence of the racism Prince faced entering the music industry. For example, the writer, Robert Palmer, states: "The fact that white rock fans and radio stations have tended to banish him to the black music ghetto says more about racism in contemporary pop music circles than it does about Prince's songs or his presentation."

I've noted that, while Palmer is being complimentary, he is doing so under the false impression that Prince is biracial, and implies that this identity has informed Prince's fusion of "black and white music," and thus his success. Of course that is all very problematic--and demonstrates why Prince lied about his heritage--but Blackmon took it a step further.

"This is an example of the white gaze because of the construct of black music being a ghetto ... instead of a fountain of influence for all types of music," she said.

3) The myriad opportunities for future study

One reason Prince conferences never get boring is because they always teach me something and reveal just how much more there is to study. That is because Prince, as my friend Joy Ellison put it, is "so vast."

Dr. Karen Turman's presentation on "Symbols and Silhouettes in Prince's Fashion" included so many fascinating details, from key designers and dress historians to translations of Japanese characters on his costumes. And I'm planning to read Monica Miller's writing on black dandyism!


Speaking of clothing, Christopher Daniel talked about two designers I'd never heard of: Louis and Vaughn. They created the 1999/Purple Rain-era ruffles look for Prince, but I'd only ever read about Marie Frances' work during that era. I can't wait to research them!

4) The joy of being around purple family

Since presenting at the Purple Reign Conference at the University of Salford in 2017, I've met and kept in touch with so many wonderful prince scholars and fans. It was great to reunite with them at the Batdance Symposium. It truly is a family, and being around them lifted my spirits after a rough week back home.

I feel that Robin Power Royal, who worked for Prince in the late '80s and early '90s, put it so eloquently:

"People that are Prince fans, once they come into contact with other Prince fans, it’s an automatic love," she said. "If you love Prince and I love Prince, then we should be able to love each other. And that’s a beautiful thing."