"Try to Clock 'Em" - Love Symbol by the Numbers 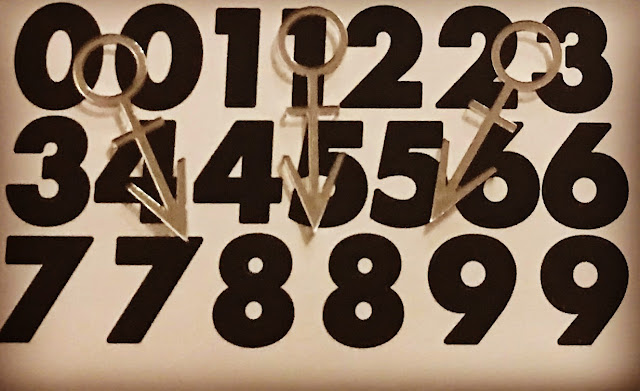 Prince had a thing for numbers. Most people know he utilized them as shorthand for words (2 in place of two, 4 in place of for, etc.), but he also integrated them into his lyrics. And he returned to certain numbers time and time again. For example, "7" is not only the title of one of his 1992 singles, but the number can be found in songs like "Nothing Compares to U," "I Love U in Me" and "My Name is Prince."

As a tribute to this obsession, I thought I'd recap one of my favorite Prince albums, 1992's Love Symbol, by pointing out just a handful of special numbers in the lyrics.

"In the beginning, God made the sea," Prince raps on the opening track, "My Name is Prince." Perhaps one of the most recognizable Biblical phrases, "In the beginning" is written in Genesis 1:1. However, according to the text, God didn't make the sea until the third day, outlined specifically in Genesis 1:10. In his next line, Prince raps, "On the seventh day, he made me." The Bible states that God made man on the sixth day and took a break the next day. Prince pokes fun at the change; "He was trying to rest, y'all" when He heard a guitar, Prince says of God with a wink.

Prince frequently altered scripture in his lyrics. It's fascinating to consider the myriad reasons for this practice. Did he do it to inject humor, as in the example above? Did he do it to adhere to a rhyme scheme? Did he do it to convey a new message that didn't fit within the confines of Christianity? Did he even do it consciously? These are the things I think about as a nerd.

Love Symbol listeners can also learn what it takes to love Prince. On the song "Love 2 the 9's," Prince orders rapper Tony M. to give a woman a 37- part "questionnaire." While there are only 18 questions in the song (yes, I counted), there's some helpful information for the ladies out there. Among other things, you must be prepared to stay awake for 14 hours, and lie down on a bed of thorns to be with Prince. What a cake walk.


One of my favorite tracks on the album is "Blue Light," which finds the singer looking for common ground with his less adventurous lover. "I'll be 117, you'll be still sayin', 'Baby, not tonight,'" Prince sings. The song is one of his multiple forays into reggae-lite; others include "Ripopgodazippa," "The Sun, The Moon And The Stars," a remix of "Pink Cashmere" and, arguably, the keyboard solo on "When U Were Mine," especially the version from One Nite Alone... Live! I think that, because I like Prince so much, I'm more open to his experiments (I know he disliked that word, sorry) with other genres. In my opinion, he always found a way to make it interesting.

I think Love Symbol has a lot of songs that shouldn't work, but do. For example, "The Continental" is an amalgamation of hip-hop, honey-dipped falsetto vocals, rock guitar licks and a jazzy B section, which I love. I can tolerate the "rap" by Carmen Electra, although Prince's lyrics point more toward his future wife, Mayte Garcia. He references a woman flipping .75, or three quarters on her stomach, which is a belly dancing trick for which Garcia was known.


When it comes to his lyrics, Prince is as bold as he is quirky. It wasn't until recently that I realized he described himself as a "50-50 girl" in the song "Arrogance." Of course, people always speculated about myriad aspects of his identity, and were aware that his symbol was a combination of the male and female signs, but I can't think of another black male recording artist who made a similar public statement during the 1990s. I think it was quite revolutionary given the limited way we discussed identity 30 years ago.

In his 1996 interview with Oprah Winfrey, Prince said he created "another person" inside as a coping mechanism during his childhood. "We haven’t determined which sex the person is yet,” he said.

"Arrogance" also includes one of my favorite Prince lyrics: "Pimp rag, Tootsie Pop and a cane." It's a description of Prince's look at the time.


The album's highest-charting single is "7." Take a guess where it landed on the Hot 100 (you're right). In the liner notes, Prince includes the words "Revelation The Book," written backwards, beside the song, giving listeners a heads up that his source material is the Bible's Book of Revelation, which is rife with references to the number.

While Prince's dedication to Christianity is apparent, he also incorporates references to reincarnation, specifically with his lyric about being present "12 souls from now." And Garcia, who co-stars in the video, has a perspective that leans more toward Indian spirituality. In her book, The Most Beautiful, she writes about Prince slaying seven versions of himself.


Prince circles back to Genesis on "And God Created Woman," a re-telling of God's creation of Eve from Adam's rib. "Bone of my bones ... flesh of my flesh," Prince sings, echoing Genesis 2:23. At the Prince from Minneapolis Symposium, Dr. Patricia McKee broke down the ways in which Prince alters the Biblical account in his lyrics. I'm hoping to include more from her paper, "'Lie down beneath my shadow with great delight': Prince interpreting biblical text through song," in my book.

A multi-genre project like Love Symbol would not be complete without an operatic near-finish; "3 Chains O' Gold" is the penultimate track that shares its name with a film starring Garcia as an Egyptian Princess. Again, it's a song that shouldn't work, but I enjoy it, especially given its squealing guitar solo.

The concluding track, "The Sacrifice of Victor," is one of Prince's most personal to date. Reflecting on his childhood, he reveals everything from his struggle with epilepsy to his experience with the Civil Rights Movement. For example, Prince sings, "In 1967 in a bus marked public schools/Rode me and a group of unsuspecting political tools."

As recently as last year, it was assumed Prince was incorrect about the year, because widespread school desegregation efforts did not begin in Minneapolis until the 1970s. However, according to research by historian Kristen Zschomler, Prince may have participated in a “voluntary urban transfer program” with approximately 79 other African-American students.

Though less operatic than "3 Chains O' Gold," the gospel-influenced "Victor" closes the album with an uplifting message: "I know joy lives 'round the corner," Prince sings. "Amen."