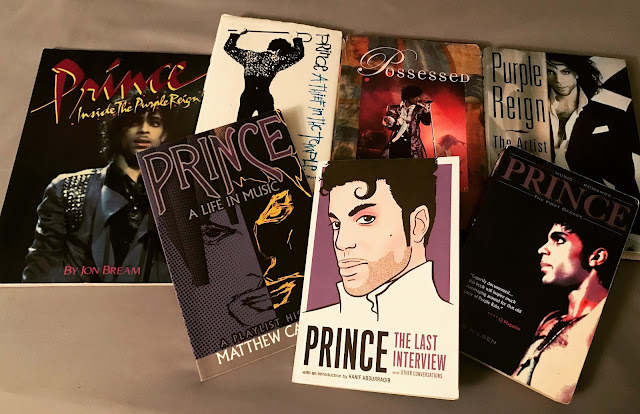 Who is Prince the person? What are his values and beliefs? What are the reasons behind his artistic and business decisions? What is his conversation style?

Those are the questions I pondered as a new fan over 15 years ago, and I sought answers in the Prince books available. First, I read Purple Reign by Liz Jones during breaks at my summer retail job. Then, I progressed to Possessed: The Rise and Fall of Prince by Alex Hahn, Dance Music Sex Romance by Per Nilsen and many more.

Some of the books weren't comprehensive. Some drew questionable conclusions. Others could have been written better. But they provided a peek into the life of an enigmatic superstar and a springboard for my own research. Because of that, I can't discount them.

It is with that spirit that I approached and enjoyed Prince: The Last Interview and Other Conversations. Released in March 2019, it is a collection of interviews Prince did with journalists over the span of his nearly 40-year career. It's also part of a series featuring the likes of James Baldwin and Julia Child.

I picture another teenager coming across this book in a library, knowing nothing about Prince save that he sang "Purple Rain" and was a little eccentric. And I think they will find a trace of him here, both in poet and essayist Hanif Abdurraqib's intro, which beautifully emphasizes Prince's humanity, and in the subsequent interviews.

I don't mind that there are only 10 articles from publications including Minnesota Daily, Vegetarian Times and Q magazine. It's a more digestible length for new fans than some of the newer biographies, which they will likely be inspired to seek. They can complete this book in an afternoon. By comparison, I think back to reading Matthew Carcieri's Prince: A Life in Music, which outlined the icon's life through a playlist of 50 songs. Though not a definitive work, it succeeded as a snapshot of Prince's career.

While I was limited to the interpretations of others during my new fandom, today's new fans have a compilation of Prince's own words in black and white at their fingertips. The Last Interview starts off well with Prince's first-ever interview, which was published in his high school paper, the Central High Pioneer.

Readers might argue about the rest of the book. I don't mind that Prince's classic, extensive interviews with Rolling Stone (in 1985 and 1990, both titled "Prince Talks") are not included. It's nice to mix it up. I don't even mind that the book includes nearly 10-year gaps between some interviews. Most phases of Prince's career ("Purple Rain" superstardom, name change, Warner Bros. exodus, online forays and retreats, and Jehovah's Witness conversion, etc.) are referenced in some capacity. And the goal is to keep the book concise.

My main complaint is the absence of at least one interview by a black journalist. Prince's initial success came from a black fan base, and he was invested in black culture and issues despite reports to the contrary. And as readers of this book will notice, some deep cultural context is missing from some of the interviews included.

Granted, Prince did not do a ton of interviews. He often criticized reporters, famously calling them "mamma-jammas and sidewinders," and sharing that, as non-musicians, many of them were not qualified to judge his work. And there were certainly limitations the editors of The Last Interview faced in gaining permission to reprint interviews.

With that said, there are still a lot of interviews by black journalists that could have been sourced. Former Right On! reporter Cynthia Horner spoke to Prince at the start of his career. Ebony's longtime writer and editor Lynn Norment interviewed Prince multiple times throughout his career. When he finally decided to open up to the press briefly in the mid-1980s, she was granted a thorough one-on-one. Over 10 years later in 1997, she sat down with him to talk about his new family and professional independence.


Including a transcript of Prince's legendary BET interview with Tavis Smiley in 1998 would have provided a more robust understanding of Prince's fallout with Warner Bros. and decision to write "slave" on his face.

Speaking of Ebony, writer Miles Marshall Lewis conducted one of the final interviews with Prince for the magazine. It was published online briefly on Dec. 22, 2015 before Prince requested it be taken down. "I guess he realized that he was too frank," Lewis said in an interview on Podcast Juice's Podcast on Prince. Editors of The Last Interview may or may not have been allowed to include the piece in the book, but you can find it here for now. It is one of the most honest and compelling interviews of Prince's career.

Despite my complaint, I found some gems in the book. I have limited research parameters for my own book on Prince (for sanity reasons), so I haven't read every single thing, nor am I aware of every single piece of trivia. I never knew the celebrity Prince was referencing in his song "Animal Kingdom," or that he was in solidarity with singer George Michael, who had a similar battle with Sony. Those are a couple things I learned from this collection.

It was also great to see little nods to things revealed in the wake of Prince's passing. For example, during one old interview, Prince briefly mentions Puerto Rico in reference to his name change. I now know he had a deep discussion with ex-wife Mayte Garcia about the decision in that country. When Prince mentions guiding his musical associates by saying, "You know what would be cool," I now know that was a phrase he regularly used to influence people. Both of those details are in Garcia's book, The Most Beautiful.

It was also really refreshing to sit down with this book and revisit and interpret Prince's words away from the noise on social media. Because there are so many perceptions of Prince in the world, it's easy for people to lose sight of what his words mean to them individually, personally.

So, at the very least, I have to say thank you to the editors of Prince: The Last Interview for the reminder.