"Acknowledge Me" - The Time Outshines Prince in Columbus

Much like Victor Frankenstein, Prince created a monster he could not control.

In 1981, Prince formed The Time, a vehicle to get even more of his music out to the world. But the funk outfit, led by the charismatic Morris Day, became a rival for attention and success.

"To this day, they’re the only band I’ve ever been afraid of," Prince famously told Rolling Stone in 1990.

According to Dez Dickerson, Prince's guitarist at the time, the friendly competition escalated into something more, especially as The Time desired more control.

"It just turned out to be more restrictive for them than they would have liked," Dickerson wrote in his book, My Time With Prince. "Prince, I believe, felt he created the band for a specific purpose, and the members were the actors he cast in his play."

Despite that tension, The Time put on dynamic performances that, for some, proved more entertaining than Prince's shows. A prime example is Prince's 1999 tour stop in my town of Columbus, Ohio.

The Columbus Dispatch gushed about The Time's opening set, but called Prince a "letdown." The publication had an even harsher perspective of opener Vanity 6.

Here's the review of the 1982 concert, re-posted with permission from The Columbus Dispatch. (Click on the image to expand.) 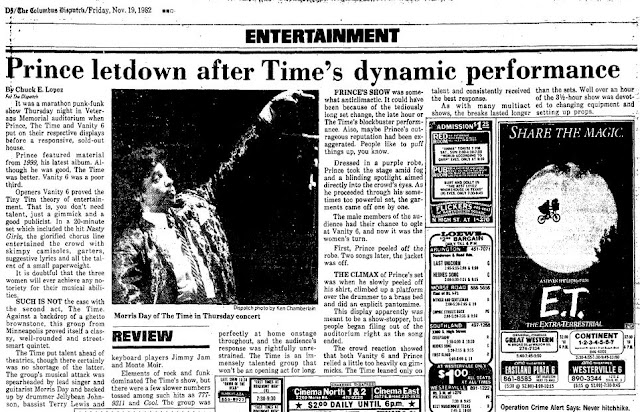