"However Much U Want" - Review of "Child of the Sun" 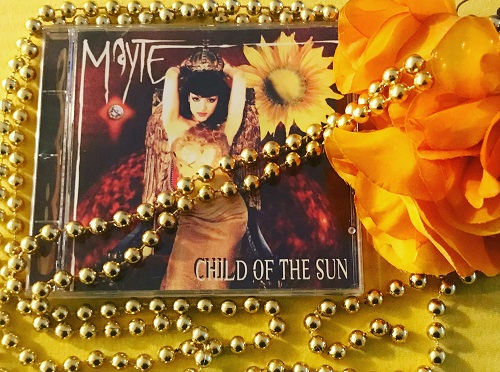 Chances are, if you were a woman in Prince's life, you heard three magic words: "Do you sing?"

Shortly after they met, Prince asked Mayte Garcia the magical question. A trained belly dancer since the age of 3, Garcia knew her strength was in movement. But she humored Prince and recorded the song, "However Much U Want." Four years later, in 1995, it was added to Garcia's debut album, Child of the Sun.

"I loved him all the more for being so supportive," Garcia wrote in her book, The Most Beautiful, "but my calling was to dance, and as I evolved as an artist, I was getting more and more interested in directing and editing."

Garcia admitted the album was actually fun. As a listener, you can tell it was a pleasant experience for Prince, too.

The project is intriguing to me because it was an outgrowth of their shared connection to Egypt. Garcia had performed there growing up, and Prince had begun to experiment with Arabic music prior to meeting her. Together, they imagined past lives in Egypt, and their love inspired Prince to create a mythic story, which unfolded on the 1992 Love Symbol album and in the 1994 3 Chains O' Gold short film.

Visiting the Egyptian Museum in Cairo, they learned about Egyptian pharaoh Akhenaten and queen Nerfertiti--"We felt connected to them in a way we couldn’t explain," Garcia said--and that the people were called "children of the sun" by some. But that was a few years after Child of the Sun was released, leading them to believe the album title was a divine foreshadowing.

While the album is not a masterpiece, some of the music is quite enjoyable. Prince doubles many of Garcia's vocals, which makes me long to hear the original demos. They both get assistance from the NPG musicians and other contributors.

Review of Mayte Garcia's book, "The Most Beautiful"

Best Prince songs of the '90s

Review of "Gold Experience: Following Prince in the '90s"


Given that Mayte is such a beautiful, charismatic dancer, I don't think it's a stretch to say she could have been molded into a solo artist like Jennifer Lopez.

By managing Robin Power and Carmen Electra in the early '90s, Prince was ahead of the trend of glamorous, sexually forward female rappers that would follow. Similarly, with Garcia, he was ahead of the "Latin pop explosion" of the late '90s. (He even considered naming Garcia's album Latino Barbie Doll.)

However, all of the women may have fared better if Prince brought in producers who could craft stronger hip-hop and pop tracks--and write better rap verses--to be competitive in the industry. That isn't to say that Prince's work isn't interesting, but it sounds too much like Prince.

Furthermore, Prince seemed to project his thoughts and values onto his proteges without giving them agency. Writer Ann Powers said it best in her review of Love Symbol for the New York Times: "The women who decorate Prince's epics also act primarily as vessels for their mentor's overflowing creativity," she wrote. "His only clear agenda ... is his devotion to an ideal that he himself embodies."

The femininity he expresses through the music is an element of his own psyche, she added.

And by listening to Child of the Sun, I can't say I have a proper window into Garcia's true personality.

Even if Prince had enlisted other producers, the album would not have made it to the U.S. market. Prince and Warner Bros. were in the midst of a public contract dispute, and the label refused to release the project. As a result, it was only available in Europe on NPG Records.

All that aside, the album is fun to listen to, and Prince even left some hidden messages next to each song in the liner notes.

Read on for my track-by-track review.

1. Children of the Sun

I dig this track! This sets the tone for the album, which, in part, explores a '90s dance sound. I can imagine an instrumental version of this track opening a movie set in a busy city. I also love the piano part, the chant--"If your tears need company, this party ain't the one"--and Prince's "Yeah-hoo! Yeah-hoo!" backing vocals. It wouldn't be out of place on the Batman soundtrack.

2. In Your Gracious Name

This song reminds me of "Love, Thy Will Be Done," which Prince composed for singer Martika, based on a prayer she'd written. However, this track is a bit more upbeat. Instead of personifying god with the word "love," the song uses "glory." It also mentions "past lives," a sign that Prince was interested in thinking about reincarnation, while maintaining some of his traditional Christian beliefs.

Prince really wanted to achieve a quiet storm sound. He would try again later with protege Bria Valente's 2009 album, Elixir. Compared to Garcia, Valente's voice is a bit more malleable and soulful. However, I truly believe Garcia's version of this track could have been a hit in the U.S. Prince originally penned the song in 1979 for Gayle Chapman. (Watch her recent live version here.) Next, he gave it to singer Mica Paris, who included it on her album, Contribution (I'm getting Chaka Khan vibes from her rendition). I'm not a fan of Prince's pattern of recycling music among proteges. With that said, he brilliantly reworked this song to better embody a mid-90s sound for Garcia.

4. The Rhythm of Your Heart

This dance track is pretty forgettable except for the part by the horn players. The verses are trivial, but the chorus is catchy and cute: "Shine like the sun/Laugh like the rain .... Try to stay happy on the darkest day." The vibe is clearly "Uncle Prince" encouraging young people, and I do like that.

I'm really proud of myself for labeling this song "industrial" before I saw Prince's message in the liner notes. This is one of the best songs on the album due to his guitar playing. (See if you recognize the drum pattern.) According to princevault.com, the song was also recorded by Jevetta Steele, but that version was never released.

I'm not even mad. Prince wisely took advantage of the "Mighty Mayte" play on words while covering this Commodores hit. I get such a kick out of hearing Prince imitate Walter Orange's vocal inflection, and I like how Kirk Johnson added Latin percussion to better suit the sound of the album.

Hidden Text: 2 Whom It May Concern

This is another recycled track. Elisa Fiorillo Dease has the better version. Fun fact: this one features an appearance by Mike Scott on acoustic guitar.

Hidden Text: Have Dog, Will Stray

"Gloria Estefan, Mayte's in the house," Prince sings on the most Latin-sounding track on the album. I'm not feeling it. Prince's Latin interludes on some of his songs are more enjoyable. Again, this would have been an opportunity for him to bring in another producer to compete with artists like Estefan. Side note: I can't get over Troy Byer doing the speaking part in a Spanish accent.

9. However Much U Want

Hidden Text: Do It

There's backmasking at the beginning of the track, because Prince. This is really the only Arabic-style song on the album, which surprised me. Overall, it's interesting because of its self-actualization message. Prince really believed we could manifest anything in our lives.

Because of the title, I was expecting a cool, sensual, modern (for that time) R&B track. Instead, I got saccharine pop ballad that isn't even that sexy.

Now I'm remembering when the "Spanish version" of a hit pop song was a thing you'd see (hi, Christina Aguilera). Prince was a smart businessman. I'm kinda mad at Warner Bros. for hamstringing this project because they could have gotten an international hit out of this song.

12. The Most Beautiful Boy in the World

I'm not sure why this was a thing. It is fascinating to think of how often Prince switched the perspectives of his songs for proteges. For example, a little birdie told me Bria Valente's "Another Boy" was once "Another Girl" ...