"You Don't Think God is Sexy?" - Three Interpretations of "Come" 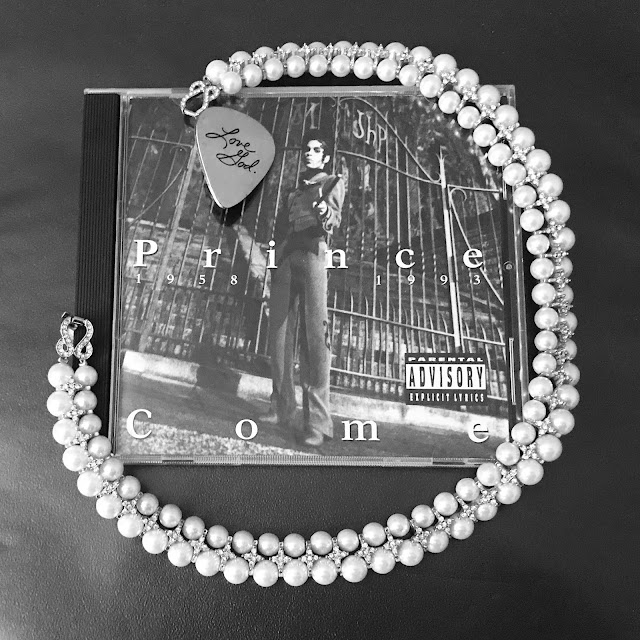 I love this exchange between Prince and journalist Adrian Deevoy during a 1994 interview for Q magazine.

"Your new song 'Come' is unarguably about orgasm," Deevoy said.

"Is it?" Prince replied. "That's your interpretation? Come where? Come to whom? Come for what?"

I don't know why any journalist would use the word "unarguably" with Prince, but such boldness among critics back then (and today) was par for the course. At the same time, I believe Prince was a master at titillating first and playing coy later.


Still, a lot of his music is layered with meaning. "Come," the title track of his 1994 album, is no different. I listened to the song on repeat all week and decided to unpack three possible interpretations.

Deevoy is not off-base. Prince is pretty direct and explicit with his language ("Can I suck you, baby? Can I fuck you, baby?") and ... sound effects, which make me wince. I didn't grow up with Prince in real time, and have always viewed him as an elder and not a sex symbol, so some songs are awkward for me, even in the privacy of my car.

What I appreciate about a lot of Prince's sex-centered songs is the creativity involved. He consistently presents himself as a "foreplay-starts-in-the-mind" lover, reveling in painting scenarios for the object of his affection before--or even in place of--the physical act. And "Come" is a heck of a mind trip; who else would conjure up a "strawberry-chocolate-Fender-jazz-mashed potato-fuzz tone" on his partner's thighs?

And this is not just sex for the sake of sex; much of Prince's music explores the benefits of a physical bond between two people in love--often conveying it as a spiritual experience. This viewpoint is explored throughout the album; Prince arguably references passages from the Biblical book "Song of Solomon," which depicts love and sexual intimacy, at the beginning of "Pheromone" ("Lie down beneath my shadow with great delight..."). In his memoir, The Beautiful Ones, he also cites "Song of Solomon" as an effective tool for teaching young people about sex.

Finally, it should be noted that, at the end of Come's closing track, the aptly titled "Orgasm," Prince says, "I love you."

Sometimes, communing with God can be as transcendent as sexual satisfaction. Prince was constantly talking about this, from Lovesexy to "Graffiti Bridge" ("Still forever searching for the spiritual substitute for sex," Aura says in the film) to this 1996 interview with The Globe and Mail.

"You don’t think God is sexy?” he asked. “When you have faith, serotonin starts pumping in your brain. It’s the same as when you have an orgasm.”

Prince expresses this idea quite beautifully on "Come" with the lyric, "Long as you wash between your soul and through your hair." It's an image he kept returning to; "Your soul a bath, what if I gave it?" he asks on "Love 2 the 9's" from Love Symbol two years earlier. And on "Sexy M.F.," a song many assume to be solely about sex, Prince is preparing his partner for their journey both down the aisle and into the afterlife: "Why all the cosmic talk?" he asks. "I just want you smarter than I'll ever be when we take that walk."

On "Come," Prince also mentions "Spirit calling." At the time, Prince was telling journalists he'd changed his name to the Love Symbol after following the "advice of his spirit." He'd later describe that inner voice as God. And that decision from his Creator led him to freedom, which brings us to ...

Prince's name change put him on a path to artistic freedom (recording independently of Warner Bros., which had trademarked "Prince"), but it also freed him from his ego. "I really searched deep within to find out the answer to whether fame was most important to me or my spiritual well-being, and I chose the latter," he later told Larry King.

But as Prince advocated for control of his master recordings, he envisioned a world where all artists--especially black artists--could own their work. He heralded this reality by writing "This is the Dawning of a Spiritual Revolution" in the liner notes for Come. And shortly afterward, he began proclaiming "Welcome to the Dawn," and launched thedawn.com, which included the following statement: "The Dawn is where [Prince] believes the record industry is headed."

In his 1994 interview with Vibe's Alan Light, for whom he played both Come and The Gold Experience, he said he was "writing more about freedom and the lack thereof."

"If you had a chance to see the future, would you try?" Prince sings on "Come."

My personal relationship with the album Come is still evolving. In the past, I've skipped everything but the haunting "Papa" and funky "Letitgo." I have to be in the right mood to listen to "Solo" because it's almost too beautiful, intimate and sorrowful. I'm also beginning to really get into the lyrics of "Space," which touches on the themes outlined above.

I often forget how strong "Dark" is as a composition; the horns really shine on that, as well as "Come," for which I've developed a newfound appreciation. The clarinet solo on the latter, which dips into an Arabic melody, is such a gem. (Side note: I love when he says, "Aw, shut up!") And Prince's vocal arrangements here, and on the entire album, and through his entire career, are greatly underappreciated!