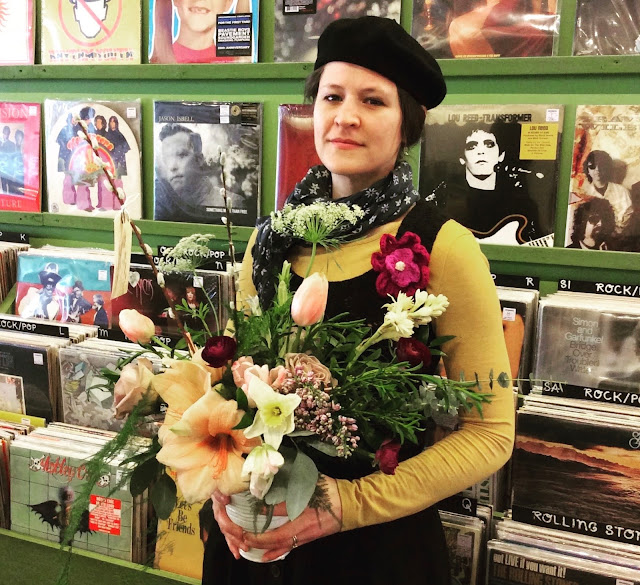 It's no secret that Prince loved Joni Mitchell's music. He covered her song, "A Case of You," and integrated her lyrics into other compositions. Two recent books, Morris Day's memoir and Prince's own autobiography, provide even more insight into Prince's fascination with the folk singer.

Mitchell remembered seeing a teenage Prince at one of her shows and, several years later, they became friends. Learn more about Prince's connection to Mitchell here.

So, why is Joni Mitchell so special? I decided to ask a record store owner for an education. Below is my Q&A with Amy Kesting, who runs Spoonful Records with husband, Brett Ruland, in Downtown Columbus. If you live in the area, check out their "Joni Mitchell Fan Meet Up" at 6 p.m. on Thursday, Nov. 7.

Why is Joni Mitchell important to you personally?

Joni has always been an alternate female voice/role model saying, "It’s OK if you don’t want to have kids, don’t want what other women want." She represents, to me, all things a woman can be, and none of it is stereotypical. She’s the counterpoint to so many ideas of "woman" I grew up with as a child of the '80s--everything from Barbie dolls to TV moms to Madonna.

And here’s Joni singing about people at the bar, parties, travels, her mean old daddy, the complicated side of romantic relationships, what her analyst told her, ice skating, small towns and suburban ennui. You can tell through her lyrics she’s just living some other kind of life.

Art keeps coming up all over her lyrics. One of my favorite songs is “The Jungle Line” about Henri Rousseau, laden with a Burundi beat she sampled before that kind of thing was a thing. She’s also a painter and that meant a lot to me in college as I was discovering her and trying to make paintings of my own. More than anything, Joni proves that it is possible to stick to your ideals and live the life of an artist.

What is Joni Mitchell’s significance in the history of folk/popular music?

Well, her reach is way beyond folk and pop. I love that photo of her, David Crosby and Eric Clapton sitting on the grass and Clapton’s expression is, "What just happened?!” She devised more than 50 different [guitar] tunings, which really allowed her to break free of the standard approach to harmony and structure.

In the course of her music career, she was a fearless innovator, composer, poet and lyricist, who shaped and stretched and experimented with all her music could be. She is so sophisticated, in a completely unforced and organic way. It’s beautiful. She is an artist, revealing her whole inner self along her journey.

"The last album I loved all the way through was [Joni Mitchell’s] 'The Hissing of Summer Lawns.'" - Prince, 1985

#1 – The Hissing of Summer Lawns

[It] retrained how I listen to music. It taught me to appreciate the way songs could blend into each other, how a whole album could convey a story, a mood, a zeitgeist. It has instruments and sounds in it I’d never heard used like that before. There are creative interludes, spoken parts ("When are you going to be home, Harry?"), lyrics not arranged in catchy, pop-music phrasing--all with masterful jazz-fusion artists (Joe Sample, Larry Carlton, Bud Shank, Wilton Felder) backing her up. I had never heard anything like it.

The album title refers to the sound the sprinklers make in the mornings in suburbia, and the album makes you feel holed up, stuck, bearing the ennui of a planned middle-class life. In some kind of existentialist way, the knowledge and awareness of these things is also the breaking out, [the] escape. Like if you can see it and sing about it, you’re going to be OK; you can still be free.

Also, I think Joni’s singing is really great on this record. There’s a ton of variation, confidence and power to her vocals. Sometimes, her early stuff comes across as girly, or overly innocent, but on this album, her singing is so clear and intentional and smart.

“The band sounds like typewriters”
“Winds of change patriarchs/Snug in your bible belt dreams”
“Like a priest with a pornographic watch”
“All these vain promises on beauty jars”
“The perils of benefactors, the blessings of parasites”

"Prince used to write me fan mail with all of the U’s and hearts that way that he writes." - Joni Mitchell, 2005

There’s so much happening in this album. The title track is a tribute to the ladies of Laurel Canyon, where Joni bought a house and made her home, where Graham Nash wrote “Our House.” She paints portraits of the women around her and you want to know them all. “Big Yellow Taxi” and “The Circle Game” became very well-known songs off this album, with cyclical/cynical viewpoints of life.

Her original version of “Woodstock” appears; it’s a haunted sort of melancholic cry for the festival she had to miss. But Crosby, Stills, Nash & Young took it and made it a brilliant anthem for a generation.“Morning Morgantown” is a favorite of mine, so simple and pretty. I sing it out loud when I’m getting my record store open. But my absolute favorite from this album is “For Free,” a song about a talented musician standing on the street corner of some anonymous place. As she listens, she ponders why she plays music and what it means to play for no one, to no audience. In a sophisticated, generous ending, a window opens, and you hear the street musician (Paul Horn) playing the refrain on clarinet, and it just breaks your heart and lifts your spirits at the same time. I absolutely love this song!

Blue truly contains my most favorite Joni songs, except that I like the songs on Blue better on Miles of Aisles (her live compilation with Tom Scott and the L.A. Express backing band), where you find jazzier, upbeat versions of “All I Want,” “Carey,” “Blue,” “A Case of You” and “The Last Time I Saw Richard.”

Also, it’s really hard to pick this record and not get wrapped up talking about Joni’s personal life. It’s so autobiographical. Every song is about a time in her life. It spans four romantic relationships, and sends a prayer out to the baby she had to give up for adoption before she left Canada (“Little Green.”)

Blue ends with “The Last Time I Saw Richard.” I don’t want to go on a rant here, but I can’t tell you how often I’ve contemplated this song. I believe it is a cautionary tale of when a poet/artist/thinker gives in to societal pressures and consumerism. We become boring adults holed up with our things, and we sort of give up the fight. It is so hard to maintain passion and it’s so easy to romanticize a time of our lives, maybe the college years or the travel years, and settle for memories. The line, “All good dreamers pass this way someday” scares the living hell out of me, especially now, in my 40s. If you’re really listening to Joni, she’s capable of putting a great fire under your ass.

Well, you asked for three, but I can’t not mention this record. This is where I relate to Joni the most and appreciate her viewpoints on exes, parents, love, criticism and lots more. I would say this is a record for women, but then a bunch of guys are going to tell me it’s their favorite.


As you know, Prince covered “A Case of You.” In your opinion, why is that song (Mitchell’s version) so compelling?

"A Case of You" is a surprising song. It doesn’t have the repetition you find in other pop songs. The music notes for each verse are totally different, so it’s just a piece of poetry put to song. The rhyming couplets (if you can call them that) are barely noticeable and really long.

I’m not a musician, but I love good lyrics and I believe it’s a great song from that perspective. And of course many glasses of wine have been consumed discussing the meaning of, “I could drink a case of you, and I would still be on my feet.” To me, these lines say, I can handle everything. I’ll take you at your worst, ugliest, grieving, sad, depressed ... and all the good parts, too, and still I’d stand beside you, be proud to be with you, stand up for you. So, yeah, it’s a perfect love song in that it never comes out and says, “I love you.” But that first line throws a wrench in it, doesn’t it?

“Just before our love got lost.” Damn. That’s life, isn’t it?


What do you think Prince and Joni Mitchell have in common as singers or songwriters (if anything)?

I’d definitely put them both in the Tireless Artist and Fearless Innovator category, always reshaping the medium, experimenting.

Read more in Reckless Daughter: A Portrait of Joni Mitchell by David Yaffe.