"The New Power Generation" - My Niece's Thoughts on Prince 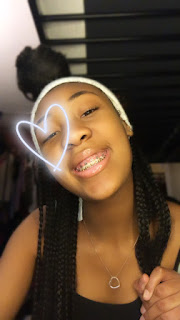 This is the final installment of my "Prince + Family Series," which has featured my dad and my mom. I wanted to get the opinion of someone younger. My niece is 13 years old and an artist herself, so I thought she'd be the perfect subject.

Our interview reinforced a few things: The young people in your life are always paying attention to your interests; Prince still inspires discussions about gender and sexuality; and his talent is undeniable.

As part of our chat, I showed my niece three Prince videos. I wanted to capture different periods of his career and pick clips that would keep her attention. And I chose a personal favorite of mine from the '90s era. I recorded her immediate reactions.

At the end of the post, you'll see a quick discussion with my sister—the only person on the planet who likes the movie Graffiti Bridge as much as I do.


Interview with My Niece

What do you know about Prince?

His song "Purple Rain" was a big hit in America and he would always wear high-heeled boots, eyeliner, mascara and always have a dot on his face, right on his cheekbone—I think it was a mole or maybe he placed it there. And he would always wear nice suits. And I didn’t understand why he would wear (what he wore). At first I thought he was gay. ... He played a lot of instruments. I heard that he was a very good musician. I heard he was really talented.

What do you remember about the day he died?

I was in my living room. We were watching the news; I think it was the "Today" show. We [eventually] heard he died from an overdose. We were so surprised. ... I was like, “Oh my gosh, all the legends are dying.” It was kinda sad. I didn’t really listen to his music, but I know he was a legend.

You know more than I thought you did.

I always do my research. I knew that you, Auntie, loved him and I was just like, "Why does she love him so much?" So I looked on YouTube, saw some of his shows. Me and my stepdad were watching a documentary on TV and I saw the high-heeled boots. They talked about the makeup and the magazines. They talked about him and his wife. I looked at how he was dancing in those high-heeled boots and I was just like, "My back would be hurting if I was dancing in some heels, too."

I don’t really think about him that much anymore now that he’s deceased. I wasn’t really into his music. Michael Jackson was the go-to. But some people are real Prince fans so I think they might know more than I do.


My Niece's Reactions to Prince's Videos


Back then (those midriff shirts) didn’t mean you were gay or bi. Men would wear that. This is jammin’. He always had that little booty. I guess I would be attracted to him in some way. He’s goofy.

Why is (the woman) wearing that on her head?

He’s wearing a scarf that you wear to bed! Oh my gosh, those heels …

I think the video overall was pretty nice. I like how they arranged it with the cameras and I like the singers. They were really good. I wonder who that one singer was [Rosie Gaines]. It wasn’t as interesting as “Kiss,” [though]. That had a little bit more funk to it. This one is like a jazz-pop song.

His hairstyle has changed. He looks older. I think he looks a little bit more masculine as he got older. It’s funny because you don’t see him moving around as much.

Um … why do they have that lady screaming like that?

That was really, really cool. [But] I didn’t understand the purpose of “Black Sweat.” She’s black and she’s sweating? Is she mad because there’s sweat on her?

No song I’ve heard of his is boring. Usually, people make albums and then it’ll be like one good song and then the rest will sound like they’re practicing. But he sounds like he knows what he’s doing. He looks handsome.


Of the three videos, which is your favorite?


“Black Sweat.” It was chill and it was up-to-date.

Does this make you want to listen to more of his music?

Yeah, I want to know more about him but I feel like it would make me sad because I would wish I would have met him. So I think I’ll stay where I’m at.


Q&A with My Sister

I think it’s just what we were exposed to [when we were younger]. I thought he was weird, of course, but I enjoyed the songs and the rivalry between him and Morris Day in the movie. I thought that was funny and I felt sorry for [Prince] because they made fun of him, but it was entertaining. I like Tevin Campbell’s song, too. The music is the best part of the movie.

How does your relationship with Michael Jackson compare?

I was more of a Michael Jackson fan, so I paid more attention to him than anybody. I couldn’t believe that you got into Prince so heavily because we grew up with Michael. You can’t really compare the two artists. They’re worlds apart. The only difference between he and Michael that puts Prince just a notch above is that he is a musician who played all those instruments. [But] I remember as a young kid feeling like I was going to pass out when I saw other people pass out from seeing Michael, and how big he was and almost not even human.

I just feel like Prince was more controversial, not only his music, but how he lived his life before the whole Jehovah’s Witness thing. It’s what people are accepting and doing now and he was doing that 20 years ago. He didn’t have a gender [expression]. He wasn’t male or female, really. He was just queer [aesthetically]. He set a precedent for what we see now. He was called weird then, but it’s accepted now, so he was ahead of his time.

Would you call yourself a Prince fan?

Do you think Prince is a good dancer?

I thought he was cool and he’s talented, but I never thought of him as a dancer. I think it’s neat acrobatics.

Subscribe to my newsletter for updates on my book on Prince's spiritual journey. Click here.
Posted by E. Thompson at 9:04 PM