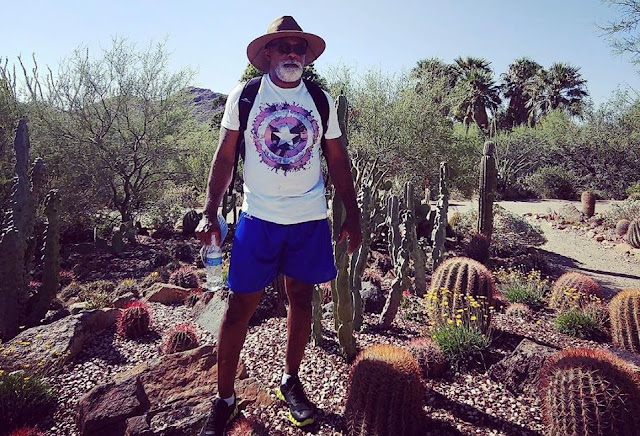 I am indebted to my parents for instilling in me a love of black music. I grew up appreciating artists like Prince because of them. They were both born the same year as Prince and grew up with him in a way. It's fun to imagine them experiencing his music in real time.

Prince was beloved by black people in the '70s, and my parents also gravitated toward his music. They appreciated his entire career, but fell away from him at times. They understood that he didn't want to be pigeonholed as a black artist, but still felt something was missing for them during his crossover to the mainstream in the mid-80s.

Besides the early stuff, my Dad loves songs like "Pop Life" and "If I Was Your Girlfriend." While most Prince fans hate Graffiti Bridge, my whole family embraced that movie. I think it's because a lot of it is rooted in blackness, featuring black royalty like Mavis Staples and George Clinton. While the script is lacking, many of the musical performances are incredible.

My dad never saw Prince live, but reconnected with his music before he died. I think I made sure he checked out 3121 (he likes "Te Amo Corazón") and Lotusflow3r (he's a fan of "Colonized Mind"). Lately I've been a bad daughter; I need to buy him all of the posthumous releases, especially the Originals album. He was asking me for more information about Prince's relationship with The Time and Alexander O'Neal, so I need to get him Morris Day's book, too!

So often we are busy just enjoying the music and not taking time to reflect on what it meant to us. To that end, it was wonderful to ask Dad some questions about Prince. Check out his answers below!


What was your first impression of Prince?

I remember both For You (1978) and Prince (1979). ... Usually you see (on the album) where different people write the songs. Well, he wrote everything and did all the instruments. All that was just amazing to me. I really liked that Prince album. I remember "When We're Dancing Close and Slow." I love that song! And of course I like "Sexy Dancer" and "Still Waiting."

You've said you love Dirty Mind (1980), but didn't you think his clothing was too racy at the time?

I did when I saw the album cover, but when I started listening to the music, it didn't bother me (anymore).

Yeah! I wasn't going to (admit) that to you. ... You really don't pay attention to (his) lyrics because you go to the club and it's got a nice beat and everybody's up jammin' and dancing. But then once you get home and you start really listening to it, you're like, "Oh, that's what he's really talking about."

What do you remember about Controversy (1981)?

I still remember your mother getting so mad--she won't even remember; she was so mad (about the title track) because it had "The Lord's Prayer" in it. I really didn't pay much attention to it until she said it.

Yeah, but not as much as his early stuff. Other audiences started liking him. I remember going to work and other people were saying, "Have you heard that Prince song, 'Little Red Corvette?' That's really nice!" And I'm like, "These people aren't even [really] listening to him." His music kinda changed a little bit, too. I liked his earlier music--it's kinda hard to explain--when it was more "him." ... I still liked him. I still liked his music but his early stuff is what I really love.

I liked the movie more (than the album). ...  People at work were dressing up like him and going (to his concert). I don't know (why I didn't go), probably because I was working. I was working third shift then.

You loved Graffiti Bridge (1990), but what did you think of him in the '90s, especially when he changed his name?

That's when he was with the New Power Generation, right? I have a few CDs from the '90s but I didn't keep up with it as much. I don't think it was "him."

I mean, this happened to Elvis, quite a few people. It probably even happened to Michael (Jackson), too. As they got older and as times changed, they fell out of the limelight a little bit. So I thought he was just trying to (get attention) because everybody was talking about how he changed his name, and that put him back out there.

Why did you start paying attention again in the 2000s?

It seemed like he got back to where he was more creative, like he was in the beginning.

Do you mean he seemed more in touch with black culture or his roots?

That's part of it but I don't want to say that's all of it. I just think he was back to where he was being more creative. It seemed like he went into a little lull there where he was just making music (to be making music).

What did you think of his performance of "While My Guitar Gently Weeps" on the day he was inducted into the Rock and Roll Hall of Fame?

I remember he (soloed) right in front of Tom Petty. I think he was messing with him, too!

Do you think he's underrated as a guitar player?

I hate to say it, but most black artists fall into that. Just because they're black (people think) the only thing they can do is R&B or hip-hop. And he's not the only one. You like Parliament-Funkadelic; if you go to any of their concerts or listen to their music, they can play anything. That's another reason why I like (Prince) so much because he can play anything. ... It was just natural.

How did you respond to his death?

That really hurt me. At first I didn't think it was true. He was always performing and I never really heard about him being ill so it was kind of a shock to me. It took me a while to really believe it until I started hearing it from you and some other people. That really hurt me. I think he had so much more to do and to pass on. I keep hearing about all these albums and stuff he had in the vault, so I'd love to hear some of that.


Subscribe to my newsletter for updates on my book on Prince's spiritual journey. Click here.
Posted by E. Thompson at 7:54 PM