"The Joint Was Hoppin'" - Three Takeaways from the #DM40GB30 Symposium 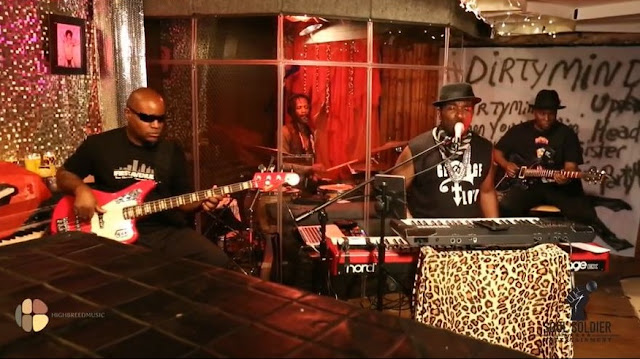 Chris Rob and his band perform a virtual set at the #DM40GB30 symposium.

It was an honor to be invited to participate this year; I did a presentation on the spiritual themes in the Graffiti Bridge film and on the soundtrack.

Instead of rescheduling the symposium for 2021, Duff boldly moved forward with a virtual event on a new platform called Hopin. I am in awe of her work ethic and dedication to promoting Prince's musical and cultural significance. This was not her first symposium, but it was arguably the best. Because it was online, it reached more people and I would guess it allowed her to secure so many amazing guests, including Jill Jones, Andre Cymone, Jerome Benton, Vernon Reid, Nicolay and PRN Alumni members (though I know she worked hard on the lineup well before the coronavirus hit).

1) An incredible feeling of community

I have been so blessed to be a part of five(!) Prince conferences/symposia, including three by Duff. Through those experiences, I've met so many scholars who have become friends. But I've also made friends among other Prince-related content creators online. Both of those crowds intersected at #DM40GB30. It was such a joy to enter the (chat) room and be greeted by so many familiar faces.

The laughter at the beginning of our #GraffitiBridge roundtable gives a sense of what joy it is to sit with @ehphd @MMLunlimited @anildash @polishedsolid every year (this is our 4th!) to chop it up abt a @Prince album. Thnk U De Angela! #DM40GB30 https://t.co/v5iAHoOrpn
— Zaheer Ali (@zaheerali) June 13, 2020


But even more beautiful was the level of support on display. We were all rooting for each other and tweeting about each other. When I went live on camera in my virtual booth, I was so grateful folks came "inside" to support me. I mentioned my newsletter, and @darlingnisi immediately dropped a link in the chat. I'll never forget that moment. C. Liegh McInnis, who was an absolute rock star presenter and moderator, took time to email me after my presentation. Jonathan Harwell, co-editor of Theology and Prince, was an amazing supporter throughout the entire event.


The fact that singer Jill Jones stayed throughout the entire event, watched the presentations and shared encouraging words with presenters is more proof that Duff has built something truly remarkable.

If you wonder why Black people are constantly repeating that Prince was Black, visit a Prince fan group sometime. You'll still find people who either erase Prince's race or project an anti-Black Lives Matter perspective on him when he said differently on video and in his own memoir.

For so long, only non-Black voices were permitted to contribute to the Prince canon. That is one of the reasons why everyone was so excited to see Right On! magazine's Cynthia Horner on a panel. Her perspective is valuable and deserves more attention. Some of us were also introduced to Black women journalists we weren't familiar with, like Carol Cooper (Google her). There were also presentations that spoke about Prince's music and Black women's sexuality in important ways that need more discussion.

It's important to note that non-Black participants were welcomed with open arms, and they added extremely valuable input. But scholars who share Prince's cultural heritage will be able to contextualize Prince's art in ways that are not apparent to others. The many Black women in Prince's life were also lifted up--something that rarely happens in white-controlled media.


3) A re-examination of Graffiti Bridge

Prince once said it would take people 30 years to get Graffiti Bridge and he was right. I loved that so many scholars took time to seriously analyze the film using myriad lenses (Christianity, African spirituality, postmodernism, fashion). Some people were converted, too! You don't have to like Graffiti Bridge, but if you are a fan of Prince's brilliance, you'll at least try to understand what he was aiming for--even if you felt he didn't succeed.

Are all of these thoughtful & insightful presentations forcing me to like the Graffiti Bridge movie? Feels like brainwashing tactics...but I’m fully on board regardless. 😂#DM40GB30
— Jason - Press Rewind Prince Lyrics Podcast (@pressrewind75) June 13, 2020


For me, Graffiti Bridge carries amazing childhood memories. I will always remember that I had the opportunity to watch with Prince's co-stars, Jill Jones and Jerome Benton, and hear their commentary.


Subscribe to my newsletter for updates on my book on Prince's spiritual journey. Click here.
Posted by E. Thompson at 10:56 PM