"All That Glitters" - Review of "Gold Experience: Following Prince in the '90s" 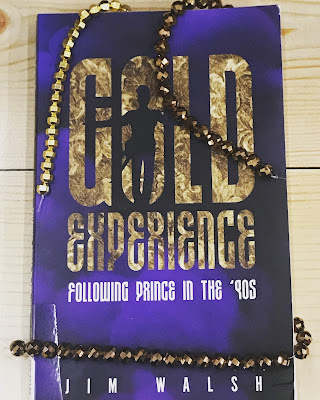 As a newspaper journalist, your beat can depend on a variety of factors: level of experience, holes in coverage and, if you're lucky, level of interest. When I finished journalism school at Ohio University, I was offered a job as a crime reporter in a rural town in Ohio. I almost took it, but ultimately decided I couldn't live on the salary. I think I would've liked the beat, but I'm not sure I would have been mentally strong enough to handle the content.

Not that my job as a reporter with Columbus Alive has been 100 percent uplifting. During the last three years on the "community" beat, I've seen great loss, corruption and despair in the city. However, I've had enough fun moments to balance it all.

I love my job and I wouldn't trade my experience for anything--except to be in journalist Jim Walsh's shoes. For nearly a decade at the St. Paul Pioneer Press in Minnesota, he handled the "Prince" beat. Most people know the late superstar was a prolific recording artist, but one might not think there would be enough content to keep a reporter busy on a weekly-to-monthly basis.

But then again, many people don't know much about Prince after the '80s. Reading Walsh's book, Gold Experience: Following Prince in the 1990s, I got a clear picture of the artist's amount of activity during the decade. When he told a crowd at his Paisley Park abode, "It's your house, too," he meant it. At one point, he threw parties and concerts nearly each weekend at either his home or his Glam Slam nightclub in Minnesota, and Walsh was present for practically all of it.

A compilation of his articles from 1994 to 2002, Gold Experience takes readers inside those magical, late-night/early-morning events (I would've paid hundreds to see Prince lying on his back playing blues guitar during a loose jam). But the real treasure in the book is its insight into Prince's personality, and a relationship of mutual respect between a journalist and his subject.

Taking a cursory glance at national articles and some biographies, one would conclude that Prince was a desperate madman during the 1990s. Having been on the ground in Prince's hometown, Walsh is able to present that common perspective--including his own reservations about the artist--against a more realistic look into Prince's motivations and, more importantly, his humanity. I think readers will also come away with a greater appreciation for the music (though I don't share Walsh's level enthusiasm for the album Come).

Because Prince was fond of Walsh, allowing him to pen liner notes for his 1995 album, The Gold Experience, and once delaying the start of a show until the reporter arrived, I worried the book would be too biased, praising everything about the musician. I quickly learned that, while Walsh presented himself as a writer "always rooting for Prince, or defending him," he was critical when he needed to be. And there were times Prince made it known he wasn't happy with him.

But there's a difference between being critical and being nasty, as many journalists were when writing about Prince. It was refreshing to read a different approach. Additionally, unlike many other reporters, Walsh was thoughtful, intelligent and respectful. His two interviews with Prince--one in person and one via fax--were some of the most insightful I've read.

"The state of race relations affects me more than ever now that I run my own affairs." - Prince to Jim Walsh, 1997

One of best gifts a journalist can get is knowing their work is being read--and that it is making a difference. Walsh had the great fortune of getting Prince's attention; the artist even summoned him to Paisley Park to share his thoughts on one article, line by line!

Best Prince songs of the '90s


Obviously, Walsh's articles impacted Prince, but, more importantly, they are making a difference now that the superstar is gone. In the market of Prince books, blogs, articles and podcasts, we need more thoughtful, probing views into this remarkable talent--especially during the '90s, when so many people wrote him off. Gold Experience gets it right.