"We'll Be Delivered" - A Look at Three Spiritual Songs on "Emancipation" 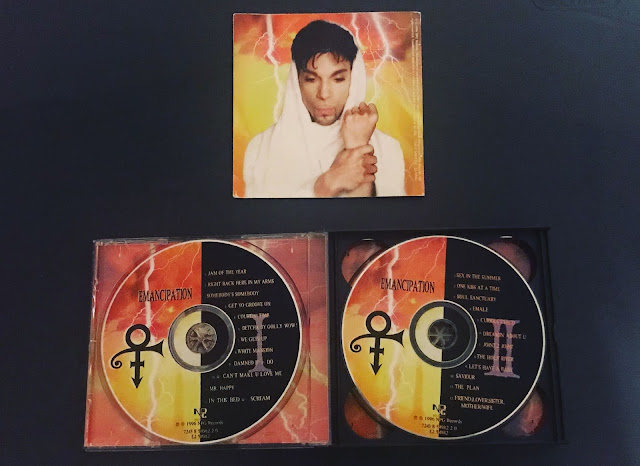 Sometimes, you can trace Prince's lyrics directly to the Bible ("God," "Anna Stesia," "7," "And God Created Woman," "Love," etc.). Other times, Prince's lyrics appear to be indirectly inspired by scripture.

His 1996 album, Emancipation, falls into the latter category. It also draws on other spiritual systems and universal creeds.

You can stream it or get a newly reissued copy. And you can read my brief take on three spiritual tracks below.

Stretching over 1,500 miles through India and Bangladesh, the Ganges river is sacred to people with ties to the Hinduism spiritual system. They pray and bathe in the water, believing their karma will be washed away.

We don't know for certain if Prince was inspired by the river or if he made a pilgrimage there, but it is possible; "The Holy River's" lyrics and video can be interpreted from a Hindu perspective. For example, when Prince sings of asking his soul "over and over" about visiting a "cold" world, and "coming back" after death, he may be alluding to reincarnation. Hindus believe that we repeat cycles of life and death until we achieve liberation ("moksha").

Furthermore, the video includes a prominent painting of one eye within a flower, likely referencing the mystical third eye, which symbolizes extraordinary perception. That perception leads to higher consciousness and includes intuitive gifts like psychic ability. The concept is rooted in Indian spirituality.

Additionally, the flower in the video is likely a lotus, which is a Hindu symbol of purity and transcendence.


Those references do not exist in a vacuum; Prince sang about reincarnation, karma, the third eye and lotus flowers throughout his career. His ex-wife, Mayte Garcia, was also forthcoming about his interest in Eastern spirituality in her book, The Most Beautiful. (Note: I do a deep dive on Prince and Hinduism in my book.)

It's important to note that these concepts did not replace Christianity in Prince's world; his beliefs simply expanded. After all, he still mentions Jesus on "The Holy River."

There are so many layers of interpretation to wade through on the song, but Prince summed up its meaning quite simply in a 1997 interview:

'"The Holy River' is about redemption."

Tackling faith and perception of God, this cover of Joan Osborne's 1995 top ten hit is a fitting choice for Prince. Instead of asking, "What if God was one of us/Just a slob like one of us," he inserts "slave," which is how he famously described his position at Warner Bros.

At a "media day" at Paisley Park in 1996, he told journalists, "I think it’s important for every musician to cover that song. And every person of color should cover it, too.”

While he didn't elaborate, it seems he may have been using the song to encourage other artists to recognize their own power; at the time, he was calling for all musicians to take ownership of their music. He was especially passionate about highlighting the historical mistreatment of black artists, and advocating for their independence. We were reminded in a recent New Yorker article that that fight continued up to his death.


"Every artist should own his masters, he told me, especially black artists," said Dan Piepenbring, co-writer of Prince's upcoming memoir, The Beautiful Ones. "He saw this as a way to fight racism. Black communities would restore wealth by safeguarding their musicians’ master recordings and all their intellectual property, and they would protect that wealth, hiring their own police, founding their own schools, and making covenants on their own terms."

So "One of Us" could be another example of Prince utilizing religious songs as coded messages to black people, similar to negro spirituals. Read more about that perspective here.

Reportedly written for musician Jonathan Melvoin (described in the liner notes as "a lost friend"), the song appears to reference Jesus with lyrics about God setting a table for his son, and the return of the savior.

But to Kat Dyson, who played the guitar solo on the track, the message is more spiritual than religious.

"We have to make our energy," she told me "We have to lay in the bed that we make with our minds and our mouths and our bodies and our actions."

And of spiritual discussions with Prince, she said, "It was very much metaphysical, very much karma."

But Prince's emphasis on love, obviously included in "The Love We Make," is a recurring theme in all of his music. In my opinion, spreading that message was an integral part of his spiritual mission.